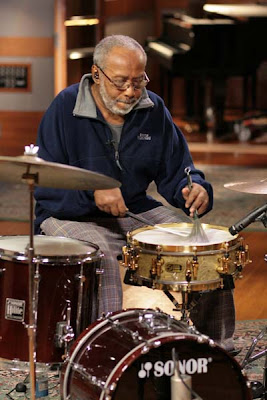 Experience the exciting sound of jazz drummer Charli Persip's Big Band, "Supersound", returning to Jazz Tuesdays in response to popular demand, on Tuesday, June 22! There will be two shows at 8:00 and 9:30 p.m. For reservations and information call 212-222-5159.

An excellent drummer both in big bands and combos, Charli Persip gained initial recognition for his work with Dizzy Gillespie's big band and quintet (1953-58). In 1959 he formed his own group, the Jazz Statesmen, which featured a young Freddie Hubbard. Persip appeared on many record sessions in the 1950s and '60s with such players as Lee Morgan, Dinah Washington, Red Garland, Gil Evans, Don Ellis, Eric Dolphy, Roland Kirk, Gene Ammons and Archie Shepp among others and was with Billy Eckstine during 1966-73. He continued to work with Rahsaan Roland Kirk in the '70s, recording on one of his best albums ever, "The Return of the 5000 lb. Man" (Warner - 1975), reissued on CD in 2005 by the Collectables label.

He has been drum and music instructor for Jazzmobile for fifteen years (and still going strong), is Associate Professor of Jazz at Queensboro Community College, has a highly successful private practice, and recently published a book entitled “How Not To Play Drums”. He has led his big band Supersound (formerly known as Superband) since the early '80s. The musical direction of Supersound presents the total spectrum of African American music-commonly referred to as Jazz-from the Bebop era to the present and beyond. Fans of all ages have thoroughly enjoyed listening to and, yes - even dancing - to the music of Supersound.

Supersound’s library consists of unique arrangements on both standards and original compositions by some of today’s most outstanding writers.

The John Birks Gillespie Auditorium is located in the heart of Greenwich Village within the Baha'i Center:
53 E. 11th St. (Between B'way and University Place)
New York, NY 10003
Posted by Arnaldo DeSouteiro at 5:38 AM