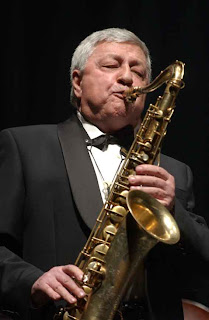 The Italian tenor saxophonist Gianni Basso died August 17 in his hometown, in Asti, at the age of 78. Basso started out as a clarinetist, and then took up the saxophone while playing in the band of Raoul Falsan while living in Belgium. Back in Italy he formed a very successful quintet together with the trumpeter Oscar Valdambrini. He regularly played with visiting American jazz musicians such as Chet Baker or Gerry Mulligan and in the 1960s also sat in with the Kenny Clarke/Francy Boland Big Band, the Maynard Ferguson Big Band and the Thad Jones Big Band. Obituary: La Stampa.
Posted by Arnaldo DeSouteiro at 10:37 AM