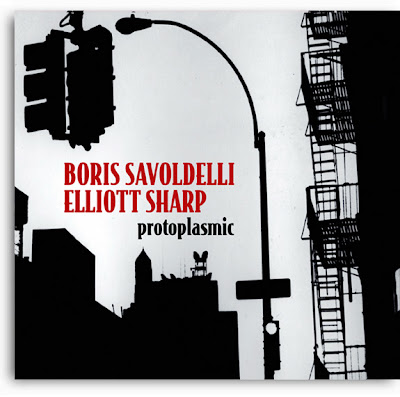 Video Clips: watch Boris Savoldelli on the artist's YouTube page
**************
Following a Milano gig by New Yorker Elliott Sharp's Terraplane, the Italian singer Boris Savoldelli handed the guitarist a copy of his freshly-recorded solo album Insanology. Sharp was blown away, and the pair met again a year later in Padova. Savoldelli announced his plans for a Manhattan jaunt, and promptly invited Sharp to guest on his September 2008 gig at The Stone, composer John Zorn's Lower East Side venue for experimental sounds. The day before the show, the pair entered Sharp's own Studio zOaR and set its controls for an extended improvisation. The result was a session of communicative depth, and its highlights are now presented as Protoplasmic.

Both players are continually seeking the pitch-shifting wobble, constantly discovering fresh ways to manipulate their real-time output. Effects boxes are liberally used, but always with a focused sense of purpose. The knobs and buttons never get beyond the control of Savoldelli and Sharp's fingers. The guitarist makes glassy shard-cascades, whilst the singer wields frosty sustain-tones, the twosome sculpting as quickly as they invent. The sounds they make are frequently pitch-shifted, but sometimes have a similar nature to the manic turntable scrabble of a hiphop DJ. Sharp jumps from electric sludge to acoustic harp impersonations, whilst Savoldelli makes guttural hog-growls, momentarily rising towards helium-howling, churchy extensions. Both players are perverting their real-time outpourings, continually massing, mutating and multiplying.

Here are two artists who share a profound facility for refined versatility. Each of them has built up a career around several varied (yet complementary) disciplines, quite possibly ensnaring completely different audiences on different days of the week. Boris Savoldelli teeters perfectly between a true pop sensibility and an anarchic improvisational wildness. He can craft overdubbed layers of sheer melodic charm, forging an experimental approachability, or he can cast off all inhibitions and launch into the completely unshackled heights of free-form spontaneity. This is a man who is comfortable with the advanced avant garde techniques of diplophony, triplophony, flutophony and criptomelody! I

n Italy, Savoldelli studied operatic vocal techniques with Simona Marcello and, more recently, in New York, he's refined his art with singers Jay Clayton and Mark Murphy. Savoldelli is also a member of the innovative avant jazz-rock combo SADO, and released the acclaimed solo album Insanology in 2008. This was a feast of inspired vocal-orchestral loop-layering, featuring a guest appearance by US guitarist Marc Ribot.

Elliott Sharp is also a multi-faceted player, his guitar masterfully extending along the perimeters of jazz, improvisation, electronica, rock'n'roll, rarefied new music composition and the grime-slogging blues. All of these zones are inhabited with complete confidence and virtuoso wit. Born in Cleveland, Ohio, he's long been identified with the eclectic downtown scene of New York City. Mainly known as an electric and acoustic guitarist, Sharp is also highly articulate on his armoury of reed instruments (saxophone, clarinet), as well as screaming out with the sliding strings of his trusty pedal steel guitar.