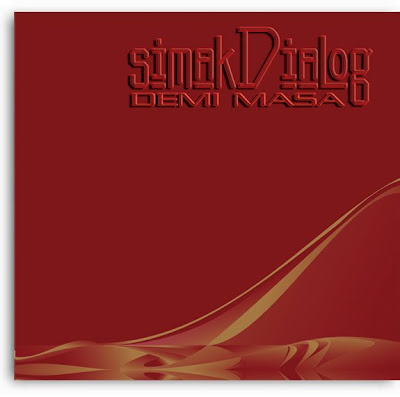 Recorded in Jakarta, Indonesia by Riza Arshad in 2008

Video Clips:
Watch simakDialog on the band's YouTube page
Watch Tohpati on the artist's YouTube page
**************
This is the fifth album from Indonesian progressive jazz ensemble simakDialog. Led by keyboardist and composer Riza Arshad, the band also features guitarist Tohpati and bassist Adhitya Pratama, working alongside the twinned percussion thrust of Endang Ramdan and Erlan Suwardana. This latter pair are specialists in traditional Sundanese kendang drumming. Arshad's compositional approach opens up from a jazz-rock palette, but his Fender Rhodes electric piano is clearly influenced by the crisp ring and shimmer of the Indonesian gamelan's array of gongs, metallophones and double-headed drums. We can immediately hear the similarities between the keyboard's percussive crackle and the sharp detonations of tunefully struck metal.

The percussionists soon enter, clattering out their heavily organic patterns with roundly slapped skins, shaker bells and handclaps. Arshad frequently pushes his solos (or are they ongoing themes?) up to continually higher levels, urging repeated climaxes as each piece steadily amasses intensity. Tohpati is also attracted to resonant trebly zones, journeying from acoustic delicacy to a subtly distorted friction. The guitarist's presence has a significance beyond his role on this album, as Tohpati is one of the Indonesian music scene's most successful (and ubiquitous) players. Another element is tipped in later, with the percussionists chanting along to emphasise their dense structures. Arshad might recline in a hazy contemplation, but it doesn't take him long to develop an insistent pulse, invariably reaching a frenzied state.

There's a clear recalling of the classic moves made by Chick Corea and Terje Rypdal in the 1970s, but this is laced with authentic gamelan elements utilised as part of this jazz-rock vocabulary. The result sounds both natural and fully integrated. This a particular realm that couldn't be reached either by Western progressives or a traditional gamelan ensemble. The simakDialog involves a unique combination of both spheres, without making the commercially tempting mistake of cultural dilution.

Keyboardist/composer Riza Arshad and guitarist Tohpati formed simakDialog in 1993. Living in the Indonesian capital of Jakarta, this band couldn't avoid being influenced by the traditional sound of the gamelan ensemble. As one of the culturally richest and diversified countries in the world, Indonesia treasures a vast variety of art and musical forms that have been a global inspiration. simakDialog are unique in having an understanding of the ancient rituals of temple music, as well as completely grasping the essence of those long-haired psychedelic sounds of slightly less ancient times. Prior to Demi Masa, simakDialog have released four albums: Lukisan, Baur, Trance/Mission and Patahan. They have won two trophies from Anugerah Musik Indonesia (Indonesian Music Awards 2003), for Best Jazz/Contemporary Jazz Album (Trance/Mission), and Best Jazz/Contemporary Jazz Producer (Riza Arshad).

Their international debut (Patahan) was released in 2007 with worldwide distribution by MoonJune Records, subsequently gaining enthusiastic reviews in over 25 countries worldwide. The band has performed extensively in Indonesia, Singapore, Malaysia and Nepal. Tours, festival appearances and seminars on ethnic percussion/music heritage are planned for 2009 and 2010, with the support of the Indonesian government.