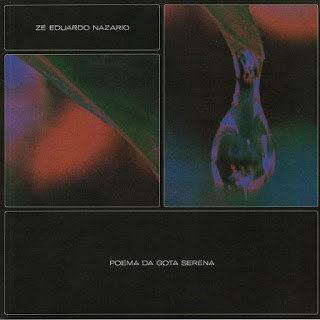 Zé Eduardo Nazario is a virtuoso musician, one of the world's greatest drummers. In the late 60s he was a regular at the famous Totem night club in São Paulo, performing alongside Tenório Jr. With Guilherme Franco (famous for his collaborations with McCoy Tyner), he formed the Grupo Experimental de Percussão. Besides an acclaimed solo career (having released several albums a leader) and legendary recordings with Hermeto Pascoal, Taiguara, Toninho Horta and Egberto Gismonti, he is equally celebrated for his six years as a member of the pioneering Grupo Um. Most recently I had the honor to work with him, in 2014, on Rodrigo Lima's "Saga" project, alongside Hugo Fattoruso, Frank Herzberg, Raul de Souza, Don Sebesky, Hubert Laws, Mike Mainieri and Sammy Figueroa.

Each side of this 1982 debut solo album originally released on the small Lira Paulistana label -- and previously reissued on CD format in 2015 by Editio Princeps with a different cover and bonus tracks -- explores different duets.

The opening track, "Energia dos 3 Mundos", presents Cacau (by then a member of Hermeto Pascoal's band and now living in France) improvising on tenor saxophone, and Nazário playing with a free, rolling, tumbling swing, using the kit in full. The second track, "Só Pra Ouvir" (dedicated to Hermeto) is more tranquil, featuring Zé’s mastery of the glockenspiel, and Indian percussion instruments such as the tabla and mridangam, whilst Cacau switches to a more delicate, dancing flute, combining northeastern with deep Amazonian influences.

The B-side is something else. Lelo Nazários’s synth clusters and electronic storms engage the exploratory percussion-work  of "Pra Pensar" with cosmic curiosity, leading into the sublime "Prá Sentir E Pra Contar," with singing by way of South India, graceful synth chords and fluttering percussion.

Expertly remastered by genius keyboardist Lelo Nazário, directly from the original tapes, and beautifully produced, with an 45rpm 180g pressing by Pallas, brings an insert that includes reproductions of early reviews of the album. It's being released on João Visconde's Lugar Alto label, and distributed worldwide by the Portobello Road-based Honest Jon's team.

It’s a blast. A thrilling example of outernational shamanism and how music can be both spiritual and challenging at the same time. Hotly recommended.
Posted by Arnaldo DeSouteiro at 10:21 PM