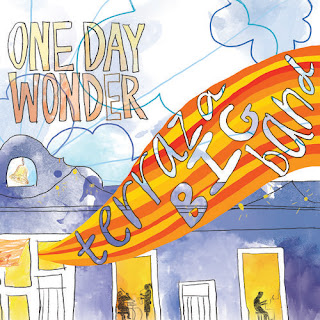 The Terraza Big Band, whose new debut album for Outside in Music is One Day Wonder, is striking from every angle, a marvelous exploration of the possibilities of the big-band format. There’s the composing-arranging of its co-founders and co-leaders, the alto saxophonist Michael Thomas and the bassist Edward Perez, full of resolutely modern jazz-orchestral harmony, inventive forms and a gamut of rhythms, from 21st-century swing to an encyclopedia of Latin-based styles. There’s the lineup, including many of the best young jazz-trained musicians in New York City, given ample opportunity to express their signature voices throughout the leaders’ generous charts. Then there are the X factors that might be a bit harder to define but are crucial nonetheless: an elastic, adaptable feel in the arrangements and performances that somehow gives this 18-piece outfit a small-group vibe; the sense that these high-caliber musicians are utterly engaged with and trusting of the leaders’ vision; a narrative approach to concert and album programming that gives a set of music the dimensions of an excellent film.

Of course, a project of this magnitude could only have developed in a very special place—in this case a venue special enough to give the group its moniker. Since its beginnings in the summer of 2015, Thomas and Perez’s band has held down a regular gig at Terraza 7, an extraordinary club in Queens, located between the neighborhoods of Elmhurst and Jackson Heights. Founded by Freddy Castiblanco, a Colombian-born former doctor and veteran community organizer, Terraza 7 features a wide range of global music and jazz—its schedule of various Latin-based ensembles is among the strongest in New York—and provides a place for artists and neighbors to coalesce around issues of social justice. “Terraza 7 is a mission for Freddy,” Perez says.

On the first Thursday of every month, the members of the Terraza Big Band become a part of that community, participating in an open rehearsal and then giving a full-length concert. To hear the band on its home turf is to receive an audiophile-worthy live-music experience. Seated directly across from the musicians, who are arranged on the venue’s transparent, loftlike stage that looms over the bar, every tricky form, every precision section part, every stout Cuban-influenced bassline, every heroic horn solo feels stunningly vibrant. The crowd—locals, jazz heads and curiosity-seekers alike—responds in kind. As the New York Times wrote in a piece on the current renaissance of New York-based large ensembles, “the [Terraza Big Band’s] audience was fully on board, but the ideas were entirely new.”

One Day Wonder, gorgeously recorded at Systems Two studio and conducted by Miho Hazama, herself a brilliant large-ensemble composer and bandleader, is essentially a virtual-reality jaunt to that great-sounding wedge-shaped room in Queens. It opens with Thomas’ “Zed,” a pointedly modern—think Kurt Rosenwinkel and Mark Turner at their most invitingly melodic—but highly playable piece. Perez’s “A New Leaf” follows, a seamless meld of buoyant Colombian-informed rhythm, graceful melody and symphonic ideas applied to jazz orchestration. “One Day Wonder,” a challenging composition crafted by the band’s tenor saxophonist Troy Roberts, is another example of Thomas’ ability as an arranger to take thrilling small-group jazz and magnify it to big-band proportions—remarkably, with no loss in urgency or expressivity. “Without Doubt” takes its title from Thomas’ experience writing it—an easygoing, almost intuitive process where everything seemed to fall into place. Here the tune provides a showcase for Thomas’ kinetic yet serene composing and some elegant solo work by Roberts, pianist Luis Perdomo and trumpeter Dave Neves.

The next two pieces dig into Perez’s life experience. His “Pasar el Tiempo, Aunque Fugaz, Contigo,” propelled by danceable rhythms and splashed with vivid colors, is a big-band update of an older number, written to reflect the excitement and euphoria that accompanied a romance Perez traversed in his 20s. “I’m 40 now,” he says with a laugh. “I wanted to see if I could retell a story from earlier in my life, and maybe tell it with a little more nuance.” “Flights of Angels,” featuring at its core Perez’s breathtaking solo bass work, is a mediation on a surreal, out-of-body encounter in the street with some especially ghostlike fog. Thomas’ midtempo swinger “Longing” contrasts odd phrases and plenty of chord changes with wide-open harmonic space for expert blowing, including a master class of a solo from the legendary trombonist John Fedchock. Perez’s “Me Lo Dijo Mi Primo” also finds plenty of inspiration in fantastic extended blowing over simple harmony—this time it’s tenorman John Ellis out front—as well as an invaluable lesson in clave that Perez learned from his fellow bassist Alain Pérez. (It’s all about the downbeats.) “Think Tank” closes the record with Thomas’ au courant vision, a small-group postbop burner writ large. Throughout One Day Wonder, many other soloists step up, among them guitarist Alex Wintz, alto saxophonist Roman Filiú, percussionist Samuel Torres and Thomas, whose fiery composure as a player evokes everyone from beboppers like Phil Woods to such bold modernists as Miguel Zenón and David Binney. Other nonpareil players interpret the co-leaders’ charts with aplomb: Andy Gutauskas, on baritone saxophone and bass clarinet; trumpeters Sam Hoyt, Alex Norris and Josh Deutsch; trombonists Matt McDonald and Nick Vayenas; bass trombonist Jennifer Wharton; and drummer Jimmy Macbride.

A graduate of the University of Miami’s Frost School of Music, where he attended on a full scholarship, Thomas also earned a master’s in jazz performance from New England Conservatory, where he received the jazz department’s sole Presidential Scholarship. While at NEC, his composition “Refract” won a DownBeat Student Music Award. Thomas’ debut album, The Long Way, was released in April of 2011. That same year, he moved to New York City to study at Juilliard and hit the ground running. Today he’s appeared as a sideman on more than 20 recordings, including Miguel Zenón’s Grammy-nominated 2014 big-band release, Identities Are Changeable, and the Dafnis Prieto Big Band’s Back to the Sunset, which recently won the Grammy for Best Latin Jazz Album. While maintaining his work as a much sought-after educator and composer, he’s performed with such luminaries as Wayne Shorter, Nicholas Payton, Jason Moran, Dave Liebman, Brian Blade, Gunther Schuller, John Patitucci, Randy Brecker, John Hollenbeck and Jason Palmer.

Thomas and Perez connected in Boston, where they’d returned to play a mutual friend’s gig. They ended up becoming roommates in New York for a time—the perfect incubator in which to work rapidly and fruitfully on new music and fuse Thomas’ deep modern-jazz interests with Perez’s Latin-oriented mastery. “We first talked about just getting some friends together to read through some charts, but we were having some really strong espresso,” Perez recalls, chuckling. “Then we were like, well, if we do that, we should do a gig.”

“When the band started,” Thomas adds, “we wanted to play with our favorite players. We were living together, and we were cranking out new charts all the time. We were sharing these ideas with each other and then taking them to the monthly gig, learning from each other.”
Posted by Arnaldo DeSouteiro at 10:21 PM