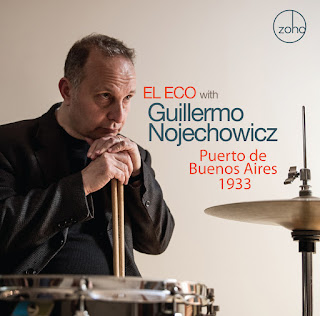 "Puerto de Buenos Aires 1933" was inspired by a remnant of Nojechowicz's family history, the passport that his grandmother carried when she fled Warsaw for Argentina in 1933 along with Nojechowicz's father, who was then a small boy. Crossing Europe by train, they left behind everything familiar to face the unknown in Buenos Aires -- a trip that spared them from the Holocaust, when so many others in their community later perished.

EL ECO festival performances have included Telluride Jazz Celebration, where the festival line-up featured Herbie Hancock and Terence Blanchard; the Curaçao Jazz Festival; the Freihofer Jazz Festival in Saratoga Springs; the Buenos Aires Jazz Festival in Argentina; and the Dominican Republic Jazz Festival. Also an international clinician and educator, Nojechowicz has led his World Jazz Ensemble students in workshops at Cambridge Rindge and Latin School with guest artists Joshua Redman and Wynton Marsalis through a collaboration with Harvard University. He has also traveled with his students to teach and perform at the Panama Jazz Festival, which features renowned jazz artists that have included Danilo Perez, Chucho Valdez, and John Scofield.
Posted by Arnaldo DeSouteiro at 9:50 PM