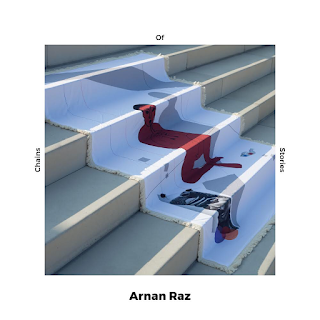 Reminiscent of his youth, Raz has cultivated a collection of heartfelt originals, by utilizing a truly innovative, yet effortless writing approach. Raz recalls: "When we were kids there was a game we used to play. It was called 'Chains of Stories'. The first to go would write a sentence, fold it, and pass it over to the next one, and they would write a new sentence without seeing what was written before. The game would continue the same way, until everyone wrote their sentences. Then we would unfold the entire page and read aloud as one coherent story. You could do the same thing with a drawing. When I wrote the title song for this album, I experimented and wrote one short phrase each day without overthinking it, waiting to see what would come out eventually. After a few weeks, I had an entire song written. Thinking of how I wrote the song, I realized it was written the same way that we used to play the game 'Chains of Stories'. This album is my chain of stories."

Influenced by the legacy of jazz masters such as Lester Young, Stan Getz, John Coltrane, as well as Charles Lloyd and Joe Lovano, The Arnan Raz Quintet succeed to create an experience full of emotion and spontaneity. With deftly-constructed solos that are congruous to the compositions in both their melodic and intuitive nature, the audience is presented with a versatile sonic palette of emotions; at times tempestuous and stirring, at other times quiet and shy.

Arnan Raz was born in a small village in the north of Israel, Kibbutz Merhavia, to a musical family; his grandfather was a music teacher and a painter. His uncle was a well-known conductor and both his mother and brother are professional guitar players. However, until the age of thirteen, Arnan's passion was soccer. Suddenly, out of nowhere and without much reason, Arnan decided that he wanted to play the saxophone. Right from the beginning, he would attend his lessons every day with his grandfather: "I knew that I played well when after I finished, I would see tears in his eyes. This image is still a constant reminder for me to what music is about".

From an early stage of his musical development, Arnan established himself as a serious and dedicated saxophone player in his hometown. His teacher at the time was Albert Beger - a known free jazz artist in Israel and Europe.

At the age of eighteen, Arnan got accepted to the prestigious Israel Defence Forces (IDF) Orchestra. At the army-training base he met all of his current band mates: Eyal Hai, Daniel Meron, Dani Danor and Tamir Shmerling. During his army service, Arnan developed his musical stance on the Tel-Aviv scene through several performances as both a bandleader and sideman.

While his IDF Orchestra colleagues decided to study at Berklee College of Music in Boston, Arnan decided to stay in Israel to study at the Jerusalem Academy Of Music and Dance. While studying with Boris Gammer, Arnan continued to accumulate his popularity as a promising young Saxophonist on the Israeli jazz scene. He performed at many prominent venues and festivals with both local and international bands and musicians.

After graduating, Arnan felt that it was the right time to move to New York to pursue his jazz career: "I felt ready, emotionally, to move to New York after working so hard on my craft". In New York he reunited with his fellow IDF orchestra members. Arnan formed his quintet and since then, this respected ensemble have garnered attention from numerous performances across the city.

Alongside his quintet, Arnan is a member of other projects such as "The Side Project"- a saxophone quartet, who, last summer (June 2017), opened for the New York Philharmonic, at Prospect Park, Brooklyn. Arnan is constantly performing with a multitude of musicians and bands in New York. Arnan records  on a regular basis for a range of bands on the jazz, indie-rock and hip-hop scene.

"I want to focus on sound. I believe that the saxophone sound has a lot of power in reaching people's hearts. Nowadays, in our materialistic world, it's so hard to communicate that I feel even more obligated to play music and to try to communicate with audiences on a "real level"."