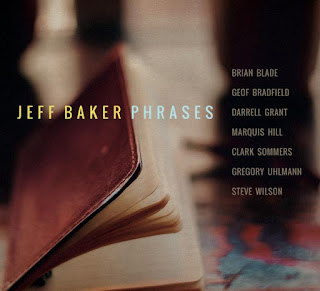 After a seven-year hiatus from recording, contemporary jazz vocalist Jeff Baker is releasing "Phrases," his fifth and most ambitious album to date. The new CD, due from OA2 Records this week, marks Baker's debut as a composer, with seven of the album's songs featuring his music and lyrics.

The album takes its title from Baker's use of what he calls "prompts" from favorite works of fiction, poetry, and song, among them texts by Pablo Neruda, J.D. Salinger, and Salvador Plascencia. Those cues could be no more than a line of poetry or a snatch of dialogue, or a real-life verbal exchange that caught his ear.

"The musical side of composing -- creating melodies, reharmonizing music -- has always come pretty easy to me," Baker explains. "But in attempting lyrics, I always felt burdened by not being Joni Mitchell. How could I express myself without sounding trite or silly? I found that if I gave myself prompts, I could create stories around them and find my voice as a lyricist. My aim was to tell stories in which people could hear their own experiences."

The deeply reflective, lushly nuanced music on "Phrases" is performed by a stellar septet whose front line includes alto saxophonist Steve Wilson and trumpeter Marquis Hill. Protean drummer Brian Blade provides the recording with its ebb, flow, and pulse. Pianist Darrell Grant both plays and serves as musical director and co-producer while Baker's longtime friends Clark Sommers and Geof Bradfield appear on bass and tenor saxophone, respectively. Young guitarist Gregory Uhlmann, a former student of Jeff Parker, is one of the album's stand-outs. The listener can hear how the musicians are drawn to the singer in their inspired, beautifully shaped solos.

"Phrases" was recorded in Chicago in May 2017 at Vijay Tellis-Nayak's Transient Sound following a live performance at the hip Fulton Street Collective. "Jazz musicians talk all the time about their 'Dream Bands,'" says Baker. "Here I am, getting to record with my actual Dream Band! I wrote this music with these musicians in mind, and I am beyond humbled that they've agreed to be part of this project." 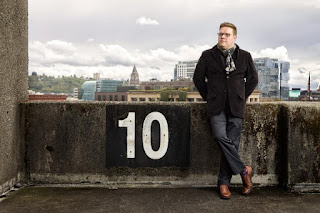 Born in 1979 in Boise, Idaho, Jeff Baker was 13 when the Seattle-spawned grunge rock movement hit. But while his friends were thrilling to Nirvana and Pearl Jam, Jeff was discovering Dizzy Gillespie's Live at the Village Vanguard. "It was the best thing ever," he says. "I learned every song and taught myself to sing with them. Singing jazz, the idea that a vocalist could be an instrumentalist and take the music to different places on a lark, was a real revelation to me. My goal became to be equal and in line with instrumental players."

Jeff's teachers and mentors "made sure I had opportunities to experience the music at the highest levels!" Chet Baker (no relation) was a major discovery for him, as were Mark Murphy and Johnny Hartman. The music of wide-ranging artists such as Sting and Peter Gabriel resonated deeply with him, as did that of Bonnie Raitt (whose "Not Cause I Wanted To" he covers on Phrases) and minimalist master Steve Reich, whose influence can be felt in the moving harmonies, piano ostinato, and streaming eighth notes on "People of Paper."

Baker attended Willamette University in Salem, Oregon, on a singing scholarship, sang in the jazz and classical choirs, and studied opera and musical theater. With plentiful opportunities to perform, he continued educating himself as a jazz vocalist. Backed by Idaho musicians, he recorded his first album, "Baker Sings Chet," largely to raise money to attend graduate school. He never went, but working in the studio, he says, "became kind of my graduate school."

The Chet Baker project, released on Origin Records' OA2 imprint, did well enough to enable Baker to make another record, "Monologue," for which Origin head John Bishop hooked him up with versatile Seattle pianist Bill Anschell. It proved to be a fruitful collaboration. Baker and Anschell teamed up on two more acclaimed albums, "Shopping for Your Heart" (2007) and the gospel-infused "Of Things Not Seen" (recorded at the same time as "Shopping," it was released with re-recorded vocals in 2009).

In 2012 Darrell Grant, a distinguished member of the music faculty at Portland State University, helped Baker land a position at PSU, where the singer was instrumental in building what came to be a renowned jazz vocal program. Baker also co-founded and is director of the PDX Jazz Forward Competition.

"We live in an incredible time for creative, genre-defying music," says Baker. "Artists like Laura Mvula, Becca Stevens, Jacob Collier, The Fellowship Band, and so many others are changing the way we think about jazz and contemporary songwriting. It's a privilege to write and make music at this time. Phrases is my humble contribution to this ever evolving conversation."