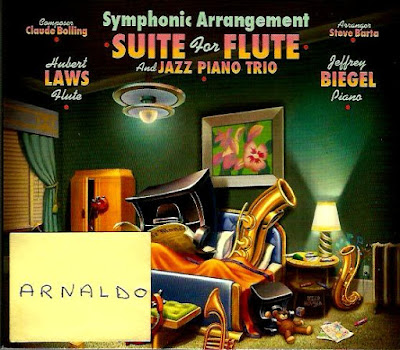 Claude Bolling's "Suite For Flute And Jazz Piano" was already born in 1975 as a masterpiece, originally recorded for Columbia by Jean-Pierre Rampal and the composer himself. (Later on, it received another excellent version for RCA by Elena Duran and Laurie Holloway in 1981.)

This brand-new outstanding Symphonic Arrangement, by Steve Barta, adds a new dimension to the work and updates its marvelous content, highlighted by jazz supreme flutist Hubert Laws and virtuoso pianist Jeffrey Biegel. Barta did a brilliant job, achieving perfect balance between respect for the original suite and the creative impetus that led him to create a vivid orchestral score, full of energy and sophistication, perfecting all nuances and subtleties.

Mike Valerio (bassist) and Michael Shapiro (drummer who was a member of Flora Purim/Airto Moreira's group for many years) also shine throughout the album. Soon available also on vinyl, it's already one of the best releases of the year!

**********
Jeffrey Biegel: "In the 1970s, I was one of millions of fans of Claude Bolling's "Suite for Flute and Jazz Piano". Fast forward to 2008, I met with Steve Barta during an engagement with the Colorado Springs Philharmonic. We talked about music and various styles. I shared with Steve how much I loved the Bolling Suite, and that I thought it might be cool with orchestra. He said he always felt the same about it. Here we are--seven years later--with this new recording, arranged by Steve, featuring the amazing jazz flutist, Hubert Laws and fabulous co-musicians in the new 'Symphonic Arrangement' of the "Suite for Flute and Jazz Piano". Special thanks to Roger Huyssen, Inc. for becoming a close frined with Steve and bringing his legendary artwork to this new recording! Special thanks also go to Manuelle Pefferkorn Mazerand for her work with Claude and helping us bring this recording to the public."

The World Premiere of Steve Barta's "Symphonic Arrangement: Suite for Flute and JazzPiano" is with the South Shore Symphony Orchestra will happen on November 20 and 21, conducted by Scott Jackson Wiley as they bring legendary jazz flutist Hubert Laws to Long Island for the premiere live performance. Please mark your calendars!

Posted by Arnaldo DeSouteiro at 10:04 PM