In choosing the repertoire for I'm a Shy Guy, his fourth album, the acclaimed Bay Area jazz vocalist Ed Reed reached way back to an early inspiration and musical hero: Nat King Cole and the King Cole Trio. "Nobody else sounded like that," Reed recalls, "and the musicianship was just fantastic." Reed's affinity with the material is obvious from the first notes of the new CD, released by the singer's Blue Shorts label.


"Once Ed got settled in on that first day in the studio, the 'first takes' started coming one after the other," says vocalist and educator Laurie Antonioli, who co-produced the date with Ed and his wife, Diane Reed. "He'd do a song and my comment was: "That's as good as I can imagine the song sounding. Let's move on while you're on a roll!' And so he did. The end result is a recording that is completely fluid and swinging."

Reed pays homage to the King Cole Trio with 13 songs the group recorded during the 1940s, plus the post-trio Nat King Cole favorite "Unforgettable" from 1951. The song selection includes Reed's distinctive treatments of the trio hits "That Ain't Right," "I'm Lost," "Straighten Up and Fly Right," "I Just Can't See for Lookin'," "It's Only a Paper Moon," and "I'm a Shy Guy," as well such lesser-known trio gems as "Baby, Baby All the Time," "Is You Is or Is You Ain't My Baby," "Meet Me at No Special Place," "'Tis Autumn," and "This Will Make You Laugh."

"I revisited over 200 tunes recorded by the Trio," says Reed, now 84, "and it was difficult trying to narrow them down to just a few." Empathetic support is supplied by Reed's longtime accompanists of choice: pianist Randy Porter, guitarist Jamie Fox, bassist John Wiitala, drummer Akira Tana, and tenor saxophonist Anton Schwartz.

As a teenager in Los Angeles, Reed was an ardent fan of the King Cole Trio and had the opportunity to see them perform at his school, Jordan High in Watts. "I wanted to be just like him," Ed recalls. But after the concert, "seeing Nat in person, I was filled with such awe that when he spoke to me and held out his hand, I was too shy to even say hello, and I couldn't even shake his hand." 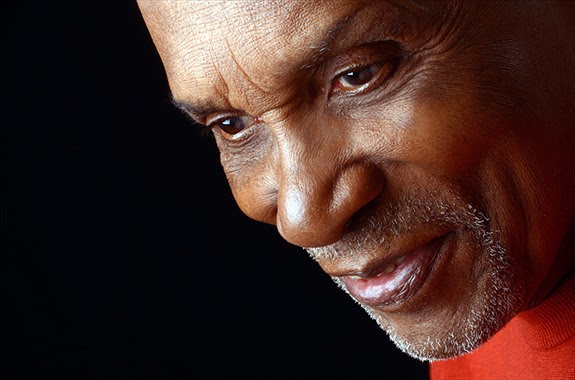 Reed's path to his current profession as a jazz vocalist was circuitous, even torturous. A 40-year heroin addiction undermined attempts to launch a singing career. He was in and out of prison during much of the 1950s and '60s, yet managed to continue singing. During his last of his three stretches at San Quentin, he performed with the Warden's Band, a 17-piece jazz orchestra that also included saxophonist Art Pepper.

He got into recovery from alcohol and other drugs in 1986, and by the early '90s had started singing again in public. In 2005 he attended JazzCamp West, where instructor Peck Allmond heard student Reed at a fireside jam session. The singer made such a strong impression on Allmond that the multi-instrumentalist, along with drummer Bud Spangler, ended up producing Ed Reed Sings Love Stories in 2007.

The following year came The Song Is You, along with expanded touring opportunities, a guest spot on Marian McPartland's Piano Jazz, and a Wall Street Journal profile by Nat Hentoff. Reed has also regularly placed in the "Rising Star Male Vocalist" category of the DownBeat Critics Poll since 2008.

His 2011 release, Born to Be Blue, was praised for "possess[ing] all the distilled emotion and narrative coherence of a jazz masterpiece" (Andrew Gilbert, San Jose Mercury News). In a DownBeat Editors' Pick review of the disc, Frank Alkyer wrote: "When Ed Reed sings, don't expect scat -- instead look for an intimate story every time."