My talented friend Lisa Marie Panagos received a Hollywood F.A.M.E. award at the Avalon Theatre. www.lamusicawards.net/hollywoodfameawards.html.
Her impressive credits include multiple Broadway shows and appearances in major films and television. Lisa Panagos is an active member of Actors Equity and SAG-AFTRA and is a 10 time award recipient from multiple U.S. and international organizations. Congrats! 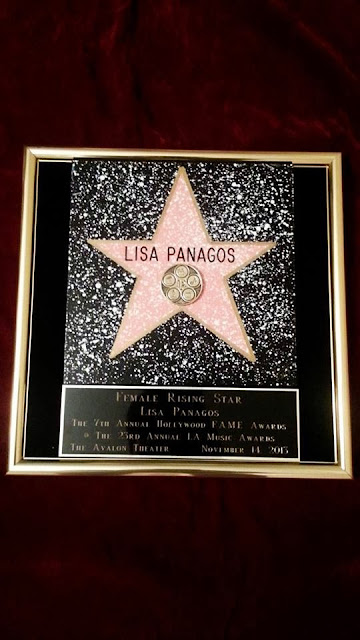 LISA MARIE PANAGOS CATCHES A STAR AT THE 7TH ANNUAL HOLLYWOOD F.A.M.E. AWARDS!
On November 14th, 2013, Hollywood was all abuzz with a star-studded show at the Avalon Theater in Hollywood. Al Bowman, the Executive Producer and Founder of the Hollywood F.A.M.E. Awards and the LA Music Awards kicked off awards show season with a media-filled red carpet event. Lisa Panagos was presented with the 2013 Hollywood F.A.M.E. Award for Female Rising Star.

“I was in amazing company at the 7th annual Hollywood F.A.M.E. awards, and feel so lucky to have won for Female Rising Star. I am so grateful to be recognized for my work in Music, Film and Television,” says Lisa. “It feels incredible when your hard work begins to pay off.” Other past HFA recipients include Brad Pitt, Sally Kirkland, Gwen Stefani, David Kershenbaum, and President Carter to name a few.

Born and raised in Potomac, Md., Lisa had stars in her eyes as she trained diligently in her hometown before heading to NYC to pursue Broadway. After landing several roles in shows such as Annie Get Your Gun, Sophisticated Ladies, Jesus Christ Superstar, and West Side Story to name a few. Lisa made the transition to Hollywood seamlessly as she landed roles in Film, TV and simultaneously continued her recording career as a Singer-Songwriter- Producer.

 This three-time award-winner at the LA Music Awards in 2012 and winner in 2013 at the Artists in Music Awards for Breakthrough Artist of the Year is now fresh off the stage from the Avalon Theater, having received a Hollywood F.A.M.E. award for Female Rising Star.

“Many thanks to all of my mentors, friends and fans who have helped me get to this point. Without you this would not have been possible. Thanks also to my parents, the late media mogul John Panagos and mother Mary Ann Panagos of Potomac, Maryland. It’s been a great journey and I’m looking forward to continuing to contribute to the entertainment business and striving to achieve more recognition.”

For more information about Lisa’s career visit her website www.lisapanagos.com. She is developing a line of products in addition to her music that are available on her website’s store. You can also find out more about her acting career at http://www.imdb.com/name/nm2166116.

Lisa is an active member of SAG-AFTRA and Actors Equity Association. She is also a 10 time award recipient from multiple U.S. and International organizations.
http://www.lamusicawards.net/hollywoodfameawards.
Posted by Arnaldo DeSouteiro at 11:15 AM