Live at the Winery, the eighth consecutive release in a series of critically acclaimed, previously unheard Art Pepper recordings on the Widow's Taste label, was just released on November 5. Laurie Pepper began her company in 2006 in order, she said, to unearth previously unreleased Art and share it with his loyal and very grateful fans.

This 1976 concert dates from the exhilarating early days of the alto saxophonist's last comeback. "I thought it was time to focus on the music Art made with some of his alternate sidemen," says Laurie. "I also chose it because I listened to the first track, 'Caravan,' and it knocked me out. I knew it had to be heard."

Recorded (anonymously) from the soundboard during a Labor Day jazz festival at the Paul Masson Winery, in Saratoga, California, this set features Art's Northern California band. He'd first encountered them in 1974 at Pete Douglas's Beach House -- aka Bach Dancing and Dynamite -- up in Half Moon Bay. He fell in love at once with pianist Smith Dobson (pictured below), a jazz educator and local performer who had worked with almost every jazz star who came through The Reunion in San Francisco and other Northern California venues. Art worked with him quite a few times and talked about taking him on the road. (Listen to Art's heartfelt little speech right after they play "Rainy Day.") The other band members were regulars Smith worked with: Jim Nichols on bass and young Brad Bilhorn on drums. 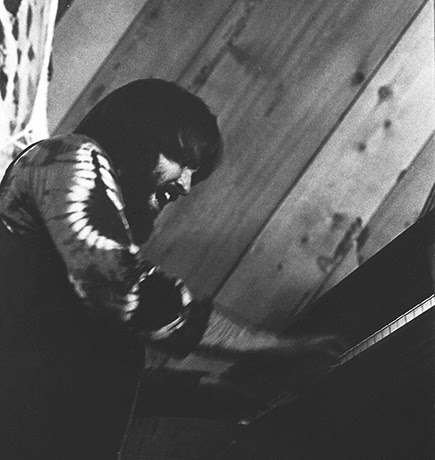 This recording was made on the last day of a three-day gig, so the band was tight and relaxed. Art began the set with the aforementioned "Caravan," which seems, despite its quaintly Oriental or Saharan references, absolutely hurtling through a Latin landscape. That's followed by one of Art's most beautiful and idiosyncratic originals, "Ophelia." Written for Art's drug addicted second wife, it's a tune that is, by turns, tender, swinging, wildly raging, and finally as fresh and pretty as the morning after a storm. The third tune, "Here's That Rainy Day," is a classic ballad Art played frequently in those days -- during which he was still earning part of his living working "casuals," Bar Mitzvahs, and weddings. It was a regularly included standard at those functions, and Art loved to play it. Ballads were his forte, after all, and this time it moves him more than usual. You can hear his voice break as he singles out Smith Dobson's solo.

If "Rainy Day" is heavenly, the next track is earthy. At casuals Art played "Ode to Billie Joe" and "Watermelon Man" for dancing and enjoyed that tremendously. "What Laurie Likes," his own original, reflects the joy he got from playing funk. But as his jazz comeback accelerated, he succumbed to his public's perception of "jazz rock" as too simple and passé and dropped that kind of thing from his repertoire, so we only get to hear this funky stuff in concerts like this one, from the '70s.

Art usually ended his sets with "Straight Life," his original, which had become his signature. This one is as breakneck and exciting as can be. And then, as an encore we get another Pepper signature, a slow, sweet blues ("Saratoga Blues").

Widow's Taste Records is doing well, and Laurie hasn't come to the end of what she thinks the public needs to hear. Her next CD release will not be entirely "unheard." She'll respond to the pressure of the fans and put out the complete blues and ballads set released in by Omnivore in 2011 on vinyl as "Neon Art." She says she also wants to release a DVD of a rare Pepper performance in Norway, but she'll have to go to a public funding source to pay for the expensive sync licensing she'd have to deal with. At that point, she threatens to also release on DVD her own Art Pepper Movie which, for the past eight years, has had to take a backseat to the record company.

In the meantime, Laurie has completed her memoir of her life with Art: ART: Why I Stuck with a Junkie Jazzman. It will be available both in print and as an ebook and will be published in the spring of 2014.