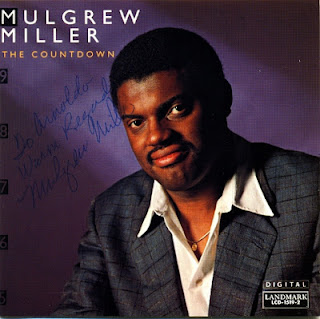 Orrin Keepnews introduced me to Mulgrew Miller at the time of this CD release, "The Countdown," which remains my favorite album among the several ones recorded by the pianist. When he autographed the CD cover to me, back in 1989, Mulgrew -- a soft-spoken gentleman who developed an extremely elegant, charming & warm piano style, taking the tradition of Tommy Flanagan and Teddy Wilson to a new level by combining it with a more modern phrasing influenced by Oscar Peterson and McCoy Tyner, but never with a "heavy" or agressive touch -- was in a worldwide tour with two other friends of mine, bassist Ron Carter and drummer Tony Williams. Both had been part of "The Countdown" sessions alongside tenor sax master Joe Henderson. Now, three of them are gone, only Ron is still alive. Oh boy, oh boy...

Mulgrew Miller, a jazz pianist whose soulful erudition, clarity of touch and rhythmic aplomb made him a fixture in the postbop mainstream for more than 30 years, died on Wednesday in Allentown, Pa. He was 57.

The cause was a stroke, said his longtime manager, Mark Gurley. Mr. Miller had been hospitalized since Friday.

Mr. Miller developed his voice in the 1970s, combining the bright precision of bebop, as exemplified by Bud Powell and Oscar Peterson, with the clattering intrigue of modal jazz, especially as defined by McCoy Tyner. His balanced but assertive style was a model of fluency, lucidity and bounce, and it influenced more than a generation of younger pianists.

He was a widely respected bandleader, working either with a trio or with the group he called Wingspan, after the title of his second album. The blend of alto saxophone and vibraphone on that album, released on Landmark Records in 1987, appealed enough to Mr. Miller that he revived it in 2002 on “The Sequel” (MaxJazz), working in both cases with the vibraphonist Steve Nelson. Among Mr. Miller’s releases in the last decade were an impeccable solo piano album and four live albums featuring his dynamic trio.

Mr. Miller could seem physically imposing on the bandstand — he stood taller than six feet, with a sturdy build — but his temperament was warm and gentlemanly. He was a dedicated mentor: his bands over the last decade included musicians in their 20s, and since 2005 he had been the director of jazz studies at William Paterson University in New Jersey.

If his sideman credentials overshadowed his solo career, it wasn’t hard to see why: he played on hundreds of albums and worked in a series of celebrated bands. His most visible recent work had been with the bassist Ron Carter, whose chamberlike Golden Striker Trio featured Mr. Miller and the guitarist Russell Malone on equal footing; the group released a live album, “San Sebastian” (In+Out), this year.
Born in Greenwood, Miss., on Aug. 13, 1955, Mr. Miller grew up immersed in Delta blues and gospel music. After picking out hymns by ear at the family piano, he began taking lessons at age 8. He played the organ in church and worked in soul cover bands, but devoted himself to jazz after seeing Mr. Peterson on television, a moment he later described as pivotal.

At Memphis State University, he befriended two pianists, James Williams and Donald Brown, both of whom later preceded him in Art Blakey’s Jazz Messengers. Mr. Miller spent several years with that band, just as he did with the trumpeter Woody Shaw, the singer Betty Carter and the Duke Ellington Orchestra, led by Ellington’s son, Mercer. Mr. Miller worked in an acclaimed quintet led by the drummer Tony Williams from the mid-1980s until shortly before Williams died in 1997.

Mr. Miller’s survivors include his wife, Tanya; his son, Darnell; his daughter, Leilani; and a grandson. He lived in Easton, Pa.
Though he harbored few resentments, Mr. Miller was clear about the limitations imposed on his career. “Jazz is part progressive art and part folk art,” he said in a 2005 interview with DownBeat magazine, differentiating his own unassuming style from the concept-laden, critically acclaimed fare that he described as “interview music.” He added, “Guys who do what I am doing are viewed as passé.”

But Mr. Miller worked with so many celebrated peers, like the alto saxophonist Kenny Garrett and the tenor saxophonist Joe Lovano, that his reputation among musicians was ironclad. And his legacy includes a formative imprint on some leading players of the next wave, including the drummer Karriem Riggins and the bassist Derrick Hodge, who were in one of his trios.
The pianist Robert Glasper once recorded an original ballad called “One for ’Grew,” paying homage to a primary influence. On Monday, another prominent pianist, Geoffrey Keezer, attested on Twitter that seeing Mr. Miller one evening in 1986 was “what made me want to be a piano player professionally.”
Posted by Arnaldo DeSouteiro at 7:36 PM