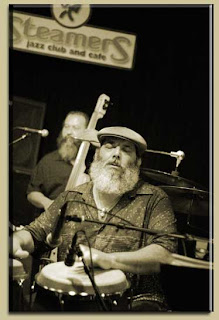 Afro-Cuban music and jazz have been among Sanchez's obsessions since his pre-teen years. Born in Laredo, Texas on October 30, 1951 but raised in L.A., he was the youngest of eleven kids - some of them hardcore jazz enthusiasts, and all of them devoted salseros.
For Sanchez, it wasn't hard to be exposed to such Latin greats as Tito Rodriguez, Tito Puente, Machito, Celia Cruz, and Ray Barretto (along with heavy doses of Charlie Parker, Dizzy Gillespie, Clifford Brown and Thelonious Monk) on a daily basis. Mambo, son, cha-cha, rhumba, guaracha - Sanchez quickly absorbed all of these Afro-Cuban styles (which fall under the umbrella term "salsa") as well as the art of jazz improvisation.
One of Sanchez's primary inspirations was the late vibist Cal Tjader, who did so much to popularize Latin jazz in the 1950s. After idolizing Tjader most of his life, a 23-year-old Sanchez ended up joining his band in 1975--and would remain with him until his death in Manila in the Philippines on May 5, 1982, at the age of 56.
Posted by Arnaldo DeSouteiro at 10:19 PM