Box Set of the Month - "The Brecker Bros. The Complete Arista Albums Collection"

And that's what they say:
"Seminal work from The Brecker Brothers – 6 of the group's best albums, plus the two "Blue Montreux" live albums – packaged together in one very cool set, in tiny LP-like sleeves! The self-titled "Brecker Brothers" album is the first super effort from the team of Randy & Michael Brecker, whose twin-horn frontline forged a very popular sound in the mid 70s – some really well-crafted numbers, done with a strong smooth approach that still sits well after all these years!

"Back To Back" features the twin horns of Randy & Michael Brecker, along with alto by David Sanborn, keyboards by Don Grolnick, and guitar by Steve Khan – but one of the things that really makes the album great is the vocal arrangements, which were handled by Luther Vandross, who also sung on the album along with Patti Austin. The set's got a great soulful feel – with some wonderful mellow groovers that have a sweet 70s sound!

"Don't Stop The Music" is a stone classic from The Brecker Brothers – working with touches of club and disco grooves to give an even smoother edge to the jazz funk of the pair. And thanks to some solid soloing that's not afraid to go for the easy spots, the album's a lot more solid than an number of sound-a-like copycat LPs to come out at the time!

"Heavy Metal Be Bop" is tight and funky jamming, with a bit more guitar here than on some of their other records – hence, possibly, the title! Keyboards and guitar jam strongly, but Randy and Michael still get in plenty of space for their solos – pushing their jazz licks with the jamming intensity that might normally be relegated to guitar heroes in the rock world.

On "Detente," the Brecker's are still rooted in jazz, but definitely step out with plenty of soul in the mix too – vocals from DJ Rogers, Carl Carlwell, Luther Vandross, and others – all of whom really add a lot to the set! On "Straphangin," the BBs manage to groove with a sharpness and depth that most of their smoother fusion contemporaries just weren't hitting – an edge that reminds us of the deeper roots these guys had before they started hitting the mainstream!

Last up are the live fusion classics Blue Montreux Vols 1 & 2 – both recorded as a unique live all-star outing by a group of Arista's best jazz players at the time! The group's an octet, but plays together in differing formations throughout the record – with Warren Bernhardt on keyboards, Michael Brecker on saxes, Randy Brecker on trumpet, Steve Jordan on drums, Steve Khan and Larry Coryell on guitars, Tony Levin on bass, and Mike Maineri on vibes – the last of which really make for some of the best numbers on the album! 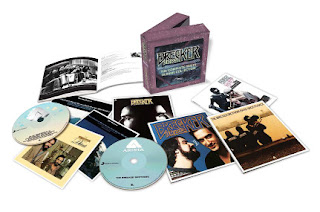 Posted by Arnaldo DeSouteiro at 9:26 AM