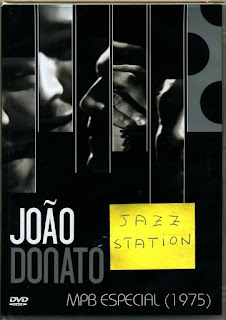 Filmed for director Fernando Faro's "MPB Especial" TV show in December 1974, and broadcasted on Brazilian TV in 1975, it's now commercially available for the very first time on DVD format by Marcelo Froes' Discobertas label, who should win an award for this historic release.

The interview is a complete mess, though. There are many mistakes about song titles, composers, dates etc. João Donato even omitts essential names in his musical career. Not a single word about people like Luiz Gonzaga (his first and main influence who led him to play accordion), Dolores Duran (the great singer-songwriter from the 50s who played a pivotal role in the development of Brazilian music in the pre-Bossa Nova days and, not coincidentally, was Donato's girlfriend at that time), and Luiz Bonfá (the master guitarist who was the first to record Donato's first hit, "Minha Saudade," with Donato on accordion back in 1955).

Not even Milton Banana and Tião Neto -- the members of his historic trio heard on the landmark albums "Muito À Vontade" and "A Bossa Muito Moderna de Donato e Seu Trio", and who also toured a lot with him from the early 60s in Europe to the late 80s at the Alô Alô nightclub in Rio  -- are mentioned. Neither his brother Lysias Enio, Donato's best lyricist ever... Donato mentions many jazzmen he admires, but forgets to talk about all the guys with whom he recorded in the USA (Cal Tjader, Tito Puente, Mongo Santamaria, Eddie Palmieri etc) and that were exremely important to his career.

The musical performances (mono sound and black & white image), however, are simply astounding, starting with a superb version of the funkified tune "Flor de Maracujá" (co-written by Lysias Enio, btw, and originally recorded by Gal Costa). Donato sings and plays solo acoustic piano (I wish he could have used Fender Rhodes too!) throughout the program -- except for some songs played on his first instrument, the accordion --, and the Brazilian genius was at the height of his powers.

Other highlights: a surprising & dreamy rendition of Tommy Dorsey's hit "I'm Getting Sentimental Over You," Antonio Carlos Jobim's "Outra Vez," and many of Donato's own gems like "Que Besteira," "Até Quem Sabe," "A Rã (The Frog)", "Lugar Comum" (previously recorded in 1962 as "Índio Perdido" and then soon to be re-recorded with Gilberto Gil's lyrics) and "Chorou, Chorou" (lyrics by Paulo Cesar Pinheiro and the opening track from the 1973 "Quem É Quem" album).

This is an essential item for Donato's fans, and his best DVD ever --alongside his collaboration with the late Bud Shank filmed in 2006, "Ao Vivo No Rio de Janeiro." One of the top DVD releases of 2013, indeed.

It's available in the U.S. through Dusty Groove, and that's what they say:
http://www.dustygroove.com/item.php?id=xq757z5x9p&ref=browse.php&refQ=kwfilter%3DDonato%2BDVD%26amp%3Bincl_oos%3D1%26amp%3Bincl_cs%3D1
An amazing live performance from the legendary Joao Donato – captured here at the height of his 70s revival years, but with a spirit that hearkens back to his classic work of the bossa generation! The setting is spare and stark – classic Ensaio footage from TV, with a strong focus on Donato's face and hands as he sings and plays piano – and even a bit of accordion on a few tracks too! Tunes are a mix of older bossa compositions and some of the new grooves Donato was cutting in the 70s – but all tracks are done in this spare mode that's really wonderful – and quite different from Joao's studio work of the period. Titles include "A Ra", "Carangue Jo", "Ate Quem Sabe", "Lugar Comum", "Chorou Chorou", "Outra Vez", "Mimi", "Levanta Poeira", "Flor De Maracuja", and "Que Besteira". (DVD is NTSC, All region.)
Posted by Arnaldo DeSouteiro at 9:06 AM