Blu-ray of the Month - "Pat Metheny: The Orchestrion Project" 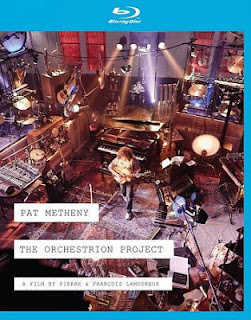 Blu-ray of the Month
Pat Metheny: "The Orchestrion Project" (EagleVision) 2012

The focus of the performance is the "Orchestrion Suite," a work written specifically for this combination and debuted on Pat Metheny's Orchestrion album released earlier in 2010. Added to this are other tracks from across Metheny's prolific career going right back to "Unity Village," from his debut solo album "Bright Size Life" in 1976 and including other tracks from the seventies, eighties and nineties. This is a unique collaboration between a master guitarist and the pinnacle of mechanical music.
Tracklist:
Disc One
1) Unity Village
2) Orchestrion Suite: Entry Point / Expansion / Soul Search / Spirit Of The Air / Improvisation #2 / Sueño con México / Stranger In Town Bonus Tracks: Improvisation #1 / 80/81 Broadway Blues / Tell Her You Saw Me / Antonia
Disc Two - An additional disc with over an hour of bonus material:
1) The Making Of The Orchestrion Project 2) Interview 3) Original EPK 4) Studio Session: Orchestrion 5) Studio Session: Expansion
Posted by Arnaldo DeSouteiro at 9:10 AM