DVD of the Month - "Chick Corea & Friedrich Gulda: The Meeting" 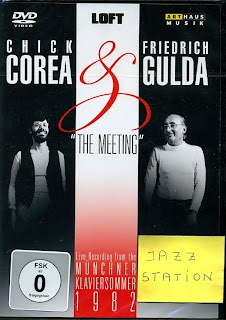 Rating:
***** (musical performance & sonic quality)
***** (audio & video remastering)
** (DVD art design, because the impact of the front cover pic, on which Corea & Gulda appeared holding hands, was destroyed since they modified it, maybe thinking it was "a gay thing"...Jesus!)
* (data info, since the names of original producers, engineers -- who did a wonderful job -- and photographers are omitted)

Originally released by the Philips label on vinyl LP in 1984 and some years later on LaserDisc (only in Japan) in 1988 -- with 4 tracks and around 55m of music on both formats --, "The Meeting" is finally reissued on DVD with its fabulous content expanded to 150 minutes (that's right, 2 hours and 30 minutes). This happens because, besides the stunning two-piano performances by Chick Corea & Friedrich Gulda, we now have available, for the very first time, the previously unreleased "solo parts" performed separately by the two geniuses on their Steinways during that blessed concert filmed at the Congress Room of the German Museum as part of the Münchner Klaviersommer (Munich Piano Summer Festival) on June 27, 1982.

The 16-page booklet, designed by Arndt WaBnann, includes rare b&w pics (by the uncredited photographer Roland Fischer) and insightful new liner notes by Marcus A. Woelfe printed in English, French and German. Oddly, however, the names of the original producers (Karl-Heinz Hein & Manfred Frei) as well as of the sound engineers (Gottfreid Düren, Peter Kramper, Wilhelm Meister) are also omitted on the DVD. Strange, very strange, and very regrettable too.

[Btw, the same uncredited producers were also responsible for having documented, during that same 1982 Klaviersommer, a few days earlier, on June 24, another memorable meeting, "Chick Corea & Nicolas Economou," released on LP by the Deutsche Grammophon label with classical works by Corea and Béla Barók, and recently reissued on CD, but never available in an official video release, although taped for broadcast on German television.]

Directed by Janos Darvas for Loft Production, the video starts with the late Gulda -- the iconoclastic Austrian virtuoso -- playing several brilliant originals (among them "Aria" and "General Dance," also included on another superb Gulda DVD, "Mozart No End," a compilation of concerts filmed in 1990) plus a highly personal rendition of Mozart's "Sonata For Piano K 330."

Corea's solo set, more cerebral but no less fascinating, consists of three improvisations and a 18-minute long variation on Thelonious Monk's "'Round Midnight" that cannot be compared to any other "version" of that famous jazz standard. But the highlight is really "The Meeting" of Corea & Gulda during 55 minutes of pure magic, when their improvised musical dialogues flow to Frank Churchill/Larry Morey's "Someday My Prince Will Come," Larry Spier's "Put Your Little Foot Right Out" (credited on both the LP and the LD to Miles Davis who, actually, developed a new tune based on it, "Fran-Dance," dedicated in 1958 to his then-wife dancer Francis Taylor Davis), "Poem No. 3" by Austrian pianist Fritz Pauer (a long-time associate of my late friend Art Farmer), and Johannes Brahms' dreamy "Wiegenlied." Pure art; essential and magnificent.
Posted by Arnaldo DeSouteiro at 5:08 PM