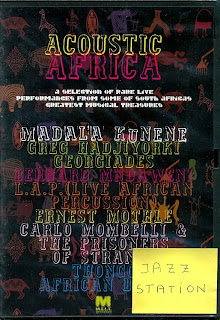 An excerpt from Trunz' liner notes:
South Africa has too few festivals and musical events dedicated to showcasing the vast variety of traditional, world and jazz music the country has to offer. As a label, we at MELT 2000 strongly supported and promoted different facets of music and artist collaborations since the birth of the new democratic South Africa in 1994. It was back in 1997 when Pascal Letellier on behalf of the French city of Nantes showcased the most elaborate representation of South African culture - an event so beautiful that participating artists themselves were surprised to experience the rich variety of their own Rainbow nation's heritage. With the help of Pascal we recorded and filmed many of the participating acts. Material from Amampondo, Moses Taiwa Molelekwa, Busi Mhlongo and Madala Kunene that has now found its way onto DVD releases.

Exactly seven years later my friend Ananda introduced me to another Frenchman, Jean Bourdin (then director of the Alliance Francaise in Pretoria) who told me of his plans for a small, intimate festival sponsored by the Alliance and the IFAS (Institut Français d'Afrique du Sud). I immediately asked him if I could make some additional programme suggestions and expressed my wish to record and film the event.

Jean's musical program found form in the 2004 Fort West Village Heritage & Cultural Festival which was built around four musicians born or raised in Tshwane (Pretoria). These are Ernest Mothle, Carlo Mombelli and the two artists to whom this DVD is dedicated, Greg Hadjiyorki Georgiades and Madala Kunene. And yet despite their common roots, the diversity of their musical influences and inspirations is awesome. The team gathered with cameras and stacks of recording gear, some of which was flown in from London by Chris Lewis - a man whose expertise with acoustic music I certainly did not want to miss. Another journey and a new era of collaborations had begun. Watch this space.
Posted by Arnaldo DeSouteiro at 4:24 PM