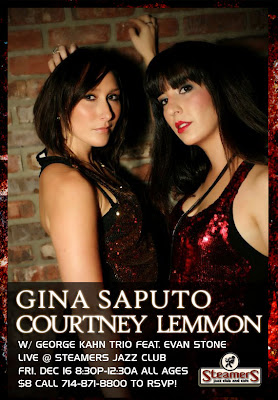 Friday's "Lover's Soire" at Steamers is gonna rock once again! This time, Gina Saputo meets Courtney Lemmon, and they will be backed by the George Kahn Trio featuring Evan Stone @ Steamers, December 16, 8:30pm-12:30am.

They will be singing fresh arrangements of yesterday and today's top 40 hits...you've never heard them like this before.

One of our favorite vocalists, Gina Saputo, a native of Springfield, Oregon, began training classically at the age of 8, singing with the Oregon Children’s Choir. By the age of 16 she was putting together her own groups and singing in jazz clubs, often waiting outside during breaks because she was underage. From there, Gina attended USC’s prestigious Thornton School of Music, and was awarded the Barry Manilow Scholarship for all four years of her education.

Gina studied at Jazz Aspen Snowmass in Aspen, Colorado under Christian McBride, and Russell Malone, was interviewed by Dee Dee Bridgewater for her show JazzSet on National Public Radio, and was among seven musicians chosen by Herbie Hancock, Terence Blanchard, Thelonious Monk Jr. and Wayne Shorter to study at the Thelonius Monk Institute. During her time with the institute, she performed for the State Department in Washington, D.C., and toured Viet Nam with Herbie Hancock and Nnenna Freelon. She has also sung backup vocals for Barbra Streisand, Barry Manilow, Neenna Freelon, Bonnie Raitt, Phil Driscoll and Louie Bellson.

Her first solo CD, “Gina Saputo,” featuring Gerald Clayton, was recorded with vocal sessions produced by Tierney Sutton, who said, “Gina has the talent as well as the passion to stretch and think outside the box.” After two successful tours of Japan, her CD has climbed to #3 on the prestigious Swing Journal charts, and has received rave reviews. She was a guest professor at Gwangju University in South Korea, 2008 and toured Japan a second time with Grammy nominated pianist Bill Cunliffe. In 2009, she appeared at the Skywards Dubai International Jazz Festival, won First Place at the Big Stage Vocal Competition, and was the vocalist for the Orange County Music Awards winning band for Best Jazz in Orange County. Gina toured Korea once again in 2010 (including a sold-out engagement at the "Once In A Blue Moon" jazz club in Seoul, recently recorded two ringtones which will be default rings on upcoming Samsung phones, and headlined Club Nokia at LA Live.

Another special talent, Courtney Lemmon (a native of Santa Monica, California) has been active musically since elementary school. Her early performances include fundraisers with such acclaimed artists as Natalie Cole and Robert Winter, as well as her solo jazz debut at 15 with Sheila Jordan and Jay Clayton. Ella Fitzgerald, Janis Joplin, Eva Cassidy, Fiona Apple and Billy Holliday all inspired her to investigate a wide range of genres. This appreciation for a wide pallet of musical styles led her to the Jazz and Contemporary Program at Manhattan's prestigious New School University, of which she is a graduate with a high respect for the blues due to her studies with the incredible pianist Junior Mance.

Back in Santa Monica, she recorded her debut CD "Stay With Me" teaming her with Grammy winner Mike Acosta as a co-writer, producer and saxophonist. Mr. Acosta is known for his work behind the original Brian Setzer Orchestra, for which her served as musical Director, arranger and featured soloist. For her first full-length recording he surrounded her with Grammy nominees and LA session players to add experience to her youthful sound. This combination of youth and experience propels her music on a journey through several of her favorite styles yet still sounds unique. The title cut "Stay With Me" garnered Courtney an Honorable Mention in the 2006 John Lennon Song Writing Competition.

Courtney's Santa Monica roots also extend out from her time at Santa Monica Community College where she was introduced to George Kahn. She appears on Kahn's 2006 release "Compared To What?", which charted in the top ten for the year in Europe. She also appears on his 2008 release singing "Use Me" on the album "Cover Up". Courtney performs around LA with Kahn from time to time at venues such as The Jazz Bakery, Catalina Bar and Grill, LACMA and other familiar Jazz haunts in the city. She has also performed with the Hollywood Symphony Choir honoring great composers of our time in beautiful Royce Hall of UCLA and has been a section leader and volunteer vocal instructor for the Idyllwild Festival Choir, which performs at Disney Hall every summer.
Posted by Arnaldo DeSouteiro at 6:32 AM