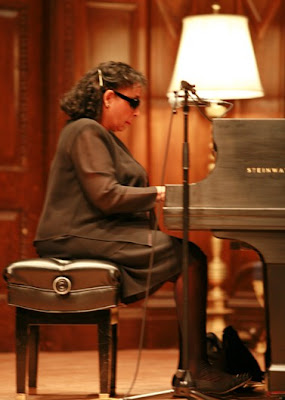 Dr. Valerie Capers makes a welcome comeback to Dizzy's Club Coca-Cola on Monday and Tuesday, September 21-22, 2009, at 7:30 & 9:30pm, with her quintet featuring John Robinson on bass, Earl Williams on drums, Alan Givenson on reeds and Mark Marino on guitar. The critically-acclaimed teacher and coach, who made her mark developing hundreds of jazz musicians during the past several decades, has played with Dizzy Gillespie, Max Roach, Ray Brown, Mongo Santamaria, Paquito D'Rivera, Tito Puente, Slide Hampton and Wynton Marsalis, among others. The only blind student ever to graduate from the Juilliard School, Capers is now a professor emeritus at Bronx Community College of the City University of New York and has released five critically acclaimed albums.

"There are moments when her thick chords, punch out on a lagging beat, evoke Errol Garner. There are bright trills that suggest Earl Hines, running single notes that might have come from Bud Powell. These are all just accents that color developments that are Miss Capers' own, although when she sweeps into Duke Ellington's "Take The 'A' Train", she projects the grandeur and vitality of the whole Ellington band," said critic John Wilson in the New York Times.

Dr. Valerie Capers was born in the Bronx and received her early schooling at the New York Institute for the Education of the Blind. She went on to obtain both her bachelor's and master's degrees from the Juilliard School of Music. Her teaching career at Bronx Community College spanned from 1971 to 1995. She served as Chair of the Department of Music and Art for the last seven years of her tenure. Her other teaching credits include serving on the faculty of the Manhattan School of music and New York's High School of Music and Art (now LaGuardia).

Her outstanding work as an educator has been lauded throughout the country as being both innovative and impressive. Susquehanna University awarded her the honorary Doctor of Fine Arts in 1996, and Doane College (Crete, Nebraska) and Bloomfield College (New Jersey, along with Wynton Marsalis), both awarded her honorary doctorates in 2004. Recent teaching and workshop venues include Doane College, Stanford University, the Cleveland (Ohio) public school system, St. Thomas high schools, Brigham Young University (Provo, Utah) Wellesley College (Wellesley, MA), Spelman College (Atlanta, GA) and the Mozarteum Conservatory (Salzburg, Austria). Among the awards and commissions she has received are the National Endowment for the Arts, including a special-projects grant to present a jazz series at the Bronx Museum of the Arts, the Smithsonian, Meet The Composer, the CUNY Research Foundation, and the Fund for Artists of Arts International.

Three of Dr. Capers' most noted compositions are Sing About Love, the critically acclaimed Christmas cantata produced by George Wein at New York's Carnegie Hall; Sojourner, an operatorio performed and staged by the Opera Ebony Company of New York; and Song Of The Seasons, a song cycle for voice, piano and 'cello (which has been recorded several times) was both commissioned by the Smithsonian Institute and premiered in Washington, D.C., at the invitation of the Smithsonian.

Dr. Capers has appeared with her trio and ensemble at colleges, universities, jazz festivals, clubs and concert halls throughout the country, including a series at Weill Recital Hall in New York and the 2001 Rendez-vous de l'Erdre in Nice, France, the Martin Luther King Festival in Ottawa, Ontario (Canada), and the North Sea Jazz Festival in The Hague (Netherlands) received rave reviews. The group has also participated in the Monterey Jazz Festival (California), the Mellon Jazz Festival (Philadelphia) and New York's Kool, JVC and Downtown Jazz Festivals.

Throughout her career, Dr. Capers has appeared on numerous radio and television programs, including Marian McPartland's Piano Jazz (1983 and 1998/2006-rebroadcast) and Branford Marsalis' JazzSet. Adventures of Wagner in Jazz, a special program created by National Public Radio (NPR),and About Music (two separate programs, "Traditions and Personalities in Jazz Piano" and "American Composer and Piano Virtuoso: Louis Moreau Gottschalk") were all broadcast on KBYU-FM in Provo, Utah and carried through the country on NPR. She was the first recipient of Essence magazine's "Women of Essence Award for Music,” in the elite company of Oprah Winfrey and Marla Gibbs.

Among the albums that Dr. Capers has recorded are: "Affirmation" (KMA Arts, 1982), "Come On Home" (Columbia/Sony, 1995), "Wagner Takes The 'A' Train" (Elysium, 1999) and "Limited Edition" (VALCAP Records, 2001). Her book of intermediate-level piano pieces, "Portraits In Jazz," was published by Oxford University Press (OUP) in 2000. OUP has also published an arrangement by Dr. Capers of the English carol, "It Came Upon The Midnight Clear" for mixed chorus a capella.

Here in New York, Ms Capers is a regular at the Knickerbocker Bar and Grill, the Lenox Lounge and Roth's Westside Steakhouse; and she is now beginning to gain more attention in Europe.

"The '50's were such a fantastic time in jazz,” she said. "I thought Charlie Parker and Dizzy were on Mount Olympus and I could never get there. My brother, Bobby Capers, who was a jazz musician who for many years played with Mongo Santamaria, suggested I slow down the speed on their records so I could follow what they're doing. That's when they became more accessible and I began memorizing lines and developing my own voice."

Gifted as both a classical and jazz pianist, Ms. Capers says, "As a classical musician, you are the servant of the composers--you try to discover what they wanted to achieve. With jazz, you're not interpreting; you're composing on the spot. You have to develop your technique to the highest level so you are able to respond to a flow of creative ideas immediately. You should listen to everything---I listen to Ravel, Stravinsky, Schoenberg, Beethoven - so all that will go into your creative soul. Then you can call upon all kinds of music during performances. That's the thrill. That's the challenge and that's the beauty of jazz."