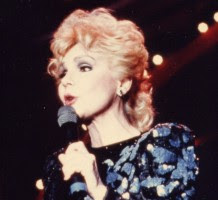 The singer Teresa Brewer died October 17th at her home in New Rochelle, New York, at the age of 76 from a neuromuscular disease. In her youth Brewer won several talent shows and made a name for herself singing mostly blues, ballads and dixieland. In the 50s she also incorporated rhythm 'n' blues and country songs into her repertoire and succeeded in landing several hits on the hit parades. In the 60s she spent most of her time at home raising her four daughters. In 1972 she married her second husband, the producer Bob Thiele who spotlighted her more as a jazz singer and produced albums coupling her with Count Basie and Duke Ellington. In 1991 she recorded an album in tribute of Louis Armstrong on which she was joined by Wynton Marsalis and Dizzy Gillespie. Obituaries: Washington Post , New York Times , Los Angeles Times , Guardian , San Francisco Chronicle .
Posted by Arnaldo DeSouteiro at 6:41 PM