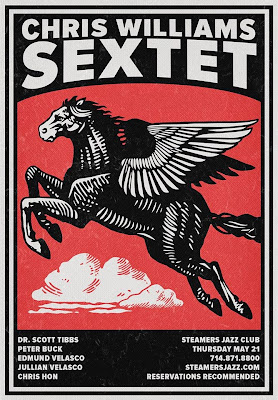 Chris Williams returns again tonite for a Thu night performance at Steamers .Chris Williams has been performing professionally since he was fifteen years old. Now at thirty, this Canadian sensation has impressed audiences with his intense passion, vocal proficiency and musical maturity. He has built a loyal following, as his highly entertaining performances are met with great enthusiasm by people of all ages.

He has toured the United States, Canada, and Europe, having performed at many prestigious venues including The Bing Crosby Estate, Catalina Bar and Grill, The Jazz Bakery, Steamers Jazz Club, The Lighthouse, Disneyland and California Adventure Theme Parks. In 2008, Chris completed a two year engagement as the Entertainment Director of the Orange County Pavilion Performing Arts Center.

In addition to overwhelmingly positive reviews in magazine and newspaper, Chris has been featured on television on L.A. Fox News 11, and has been heard on the radio on KKJZ 88.1 fm with Helen Borgers, on KABC 790 am with Doug McIntyre; and on KLAC 570 am as part of their Fabulous Finds series.

He has earned many awards including four vocal solo awards at the Lionel Hampton Jazz Festival, and a major scholarship to the elite Berklee College of Music in Boston. His recording of "Comes Love" from his debut album Premodernism won Best Latin Song at the 2007 Orange County Music Awards.
Posted by Arnaldo DeSouteiro at 4:18 PM