Jazz CD of the Month - "The Dan Brubeck Quartet: Celebrating the Music and Lyrics of Dave & Iola Brubeck" 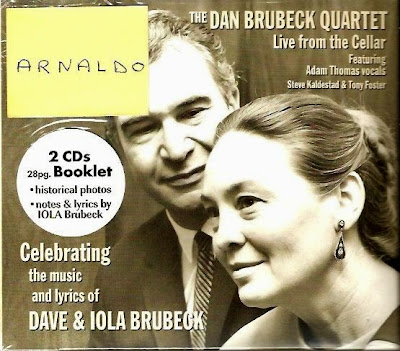 Jazz CD of the Month
The Dan Brubeck Quartet: "Live from the Cellar - Celebrating the Music and Lyrics of Dave & Iola Brubeck" (Blue Forest)

On his brilliantly realized new album "Celebrating the Music and Lyrics of Dave & Iola Brubeck," top-class drummer Dan Brubeck introduces his parents' remarkable and surprisingly little-known songbook. The second youngest of Dave and Iola Brubeck's six children, Dan has an extensive history of performing and recording alongside his famous pianist father Dave Brubeck and had long wanted to explore some of the songs and textual settings that his parents collaborated on over the years.

The 2-CD set, which happens to be Dan's recording debut as a leader, was released by Blue Forest Records on April 28, 2015, including a 28-page booklet with historical photos and extensive liner notes by Iola Brubeck and Dan himself. "Some of these songs could be classified as 'standards,'" he notes, "but most people have never heard them with Iola's lyrics. Many of these songs have rarely been heard at all."

"In Your Own Sweet Way" is the track that opens the album, and as with many of the pieces that follow, Iola wrote the lyrics specifically for a jazz legend (Carmen McRae). Iola, who died last year at the age of 90, contributed incisive insider commentary about the songs for the album's liner notes. Dave Brubeck, a much missed longtime friend, passed in 2012 at the age of 91. [I had the honor to write authorized & publishd lyrics to Brubeck's "Broadway Bossa Nova" (at his request!) and we developed a friendship that lasted from 1980 till his passing.]

The opportunity to pursue the project arose unexpectedly with some of the finest jazz players in the Vancouver, BC area, including saxophonist Steve Kaldestad, pianist Tony Foster, and bassist/vocalist Adam Thomas. "These are the guys who had good chemistry and we stuck together," says Brubeck, 59, a longtime resident of British Columbia.

Brubeck made the serendipitous discovery that his bassist was the perfect vocalist for this material. "He was completely in tune," Dan says of hearing Thomas's singing for the first time, "phrasing beautifully with a soulful sweetness, all while swinging his ass off on bass. When the quartet had a gig we just set up mics in the Cellar, which is tiny and intimate. I was just amazed when I listened back to what we got."

Thomas's most impressive feat is the easygoing authority he brings to interpreting songs the Brubecks created with Louis Armstrong in mind. He swings joyfully on "Since Love Had Its Way," and wrings every wistful drop from the masterpiece "Summer Song," an intoxicating draught of song that has unaccountably remained uncovered until this year (both songs were introduced by Satchmo in the Brubecks' politically astute jazz musical The Real Ambassadors). Adding to the poignancy of "Summer Song" -- also brilliantly recorded by Jackie Cain on Jackie & Roy's masterpiece album, "Time & Love" (CTI), featuring Paul Desmond's "dry martini" alto sax -- is the fact that the chorus serves as Dave and Iola's epitaph.

The quartet doesn't avoid the best-known numbers, offering memorable instrumental versions of the oft-interpreted "Blue Rondo a la Turk" and Paul Desmond's enduring hit "Take Five," two pieces from the landmark "Time Out" LP. But digging deep into the catalog yields one unexpected gem after another. From "It's A Raggy Waltz" to "The Duke," recorded by Miles Davis & Gil Evans. Thomas hits just the right plaintive tone on the minor blues "Lord, Lord," a piece from Brubeck's suite The Gates of Justice. And "Strange Meadowlark" is another superlative piece that, like "Summer Song," could easily become a standard (it's got a good start with recordings by Carmen McRae, Frederica von Stade, and Hilary Cole).

Born in Oakland on May 4, 1955, Dan Brubeck was a highly energetic child who found his calling at the trap set. Mentored by two consummate polyrhythmic masters, Joe Morello and Alan Dawson (at the Berklee College of Music), he was working professionally before he finished his teens. Over the years Dan was featured on nearly a dozen albums with his father, and toured widely with the Dave Brubeck Quartet, including many appearances with the world's leading orchestras. He's been an integral part of the various Brubeck bands, including the Darius Brubeck Ensemble, Two Generations of Brubeck (the group that toured Brazil in 1980), and the New Brubeck Quartet.

Dan continues to perform and record with his siblings -- Chris Brubeck, a bassist, trombonist, and noted composer, in the Brubeck Brothers Quartet, and pianist/composer Darius Brubeck in Brubecks Play Brubeck -- when he's not playing with his Vancouver band. 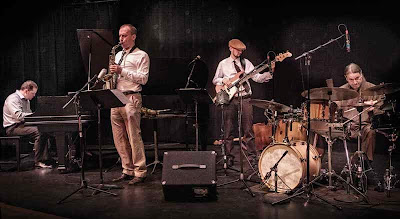