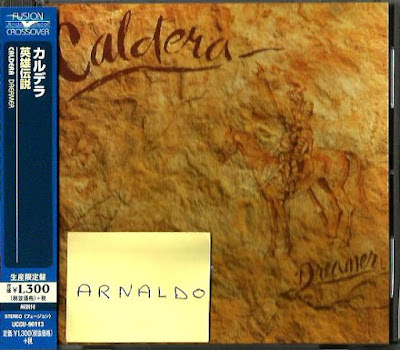 The fourth and final album on Caldera's discography, "Dreamer" finally comes out on CD for the first time ever, as part of the "Fusion Crossover Ultimate Collection." The LA-based group reached a new plateau of intensity and sophistication on that album, recorded in 1979, when jazz-rock (then already called "fusion") started to lose power on the market.

I still treasure not only my vinyl copy as well as a very big promotional poster with the wonderful LP front cover art, that makes me remember that the track "Dreamchild" (a proto-smoth jazz number) was the only one that received a lot of airplay at the time of its original release. But the highlights are the Brazilian-oriented "Celebraton" (Rhodes and MiniMoog evoking Chick Corea's best samba adventures), the haunting Shakti-meets-Paco "Brujerias" and the electrified & electrifying Santana-tinged "Himalaya." Very nice memories of a "vintage LA" scene.
Posted by Arnaldo DeSouteiro at 10:51 PM