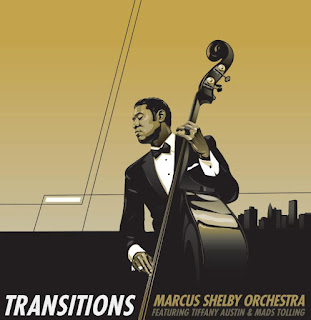 Bassist, composer, and bandleader Marcus Shelby brings together three of his greatest passions -- African-American history, baseball, and big-band jazz -- on Transitions, the latest work by his 15-piece Marcus Shelby Orchestra, set for a June 7 release on his own MSO Records. While the album offers Shelby's lush arrangements of classic tunes by Charles Mingus, Duke Ellington, and Cole Porter, its centerpiece "Black Ball: The Negro Leagues and the Blues" is an original four-part suite inspired by the history of Negro League Baseball. It also features superb work by two special guests, violinist Mads Tolling and acclaimed vocalist Tiffany Austin.

Shelby's work to date has established his penchant for deep musical dives into African-American history and culture. Transitions is not a full-length opus like his 2007 oratorio Harriet Tubman or 2011's Soul of the Movement: Meditations on Dr. Martin Luther King Jr., but it is unquestionably on the same ambitious path as those two works. It's also a natural choice of subject matter for San Francisco-based Shelby, a self-described baseball aficionado who (when he's not on the bandstand) can often be found cheering on his beloved San Francisco Giants.

"I did a whole theatrical project that premiered last September at the Yerba Buena Gardens Festival," he explains. "It re-created the environment of a Negro League baseball park. This suite was inspired by the research I did for that project. But it's more about these four cities -- Pittsburgh, New York, Chicago, Kansas City -- that were very central to the Negro Leagues." 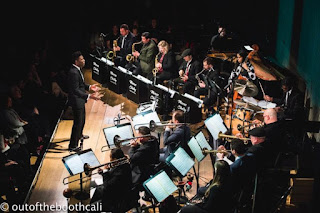 Those were also central to the development of jazz, and Shelby's pieces reflect the parts they played in that development. The suite's opening "Transition 1 (Pittsburgh)," a nod to two powerhouse teams (the Pittsburgh Crawfords and the Homestead Grays), also reflects the city's blues tradition and the hard swing generated by native-son drummers from Art Blakey to Jeff "Tain" Watts. Its finale, "Black Ball Swing (Kansas City)," celebrates the Kansas City Monarchs -- "the best known, most respected team of all time in the Negro Leagues," Shelby says -- with both the riff-driven style of the Count Basie Orchestra and the supercharged bebop of Charlie Parker, both Kansas City exports.

Transitions also includes one composition each by Charles Mingus and George Shearing, along with two by Cole Porter and three by the grand master of big band writing, Duke Ellington. It's "an album that mirrors a live performance," he says. "It's like seeing one of our concerts. It felt good to break away from doing programmatic music to playing some straight-up blues and swing and standards." The Duke's gorgeous but rarely played "On a Turquoise Cloud" is a feature for guest violinist Tolling, while his "Mood Indigo"and "Solitude," along with Shearing's "Lullaby of Birdland"and the two Porter tunes, are vehicles for Tiffany Austin's vocals. 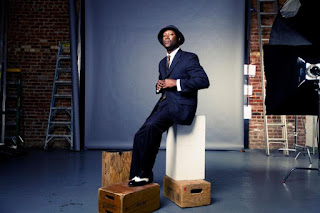 Marcus Shelby was born February 2, 1966 in Anchorage, Alaska, moving to Sacramento, California at the age of five. He played the bass as a teenager, but his real passion was for baseball and basketball, earning a college scholarship in the latter. At 22, however, a concert by the Wynton Marsalis Quartet reignited his love of music, and he returned to school at California Institute of the Arts (CalArts) in Valencia, where he studied with Charlie Haden and James Newton.

First gaining attention in Los Angeles as a cofounder (with drummer Willie Jones III) of the hard-bop band Black/Note in the early 1990s, Shelby relocated to San Francisco in 1996. He quickly established himself as an essential creative force on the Bay Area arts scene, leading both the Marcus Shelby Trio and the Marcus Shelby Jazz Orchestra and earning increasingly prestigious commissions from dance companies, theatrical productions, and presenters.

Marcus Shelby will perform as Resident Artistic Director at SFJAZZ, 201 Franklin St, San Francisco, Thursday 5/23 through Sunday 5/26. The four-night run will feature the artist in collaborations literary (with Daniel Handler, aka Lemony Snicket), political (with Angela Davis), and Ellingtonian (with Faye Carol, Kenny Washington, and Mads Tolling), along with an evening dedicated to the performance of "Black Ball: The Negro Leagues and the Blues."