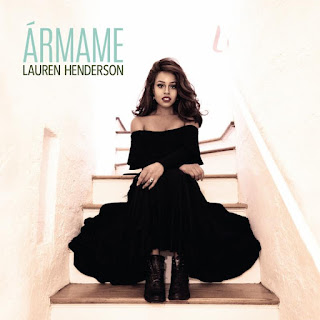 On her lovely and coolly sensual new recording, "Ármame," vocalist Lauren Henderson delivers an eclectic set of jazz, Latin jazz, and other styles in a program reflecting her African-American and Caribbean heritage and her omnivorous musical tastes. Produced by veteran broadcaster and Sirius/XM jazz host Mark Ruffin, the CD was released on her new label, Brontosaurus Records.

The album's title translates as "Arm Me" (as from a broken heart), and the subtitle "Songs of Love and Loss" provides insight into Henderson's repertoire choices. In addition to premiering three new originals, the vocalist adds to her already impressive credentials as a deft interpreter of others' songs with heartfelt arrangements of "Love Is a Losing Game" by Amy Winehouse, Blossom Dearie's heartbreaking classic "Inside a Silent Tear," and Donny Hathaway's "We're Still Friends."

The two songs on which Terri Lyne Carrington sings backup vocals -- "To Wisdom the Prize," by Larry Willis, and "Better Days," a nod to Chaka Khan, who's a favorite singer of Henderson's -- are a particular highlight. "There's this special, natural thing about how our voices go together," Henderson says of working with Carrington.

One of Henderson's major influences, Shirley Horn, is represented by two mid-tempo selections from that master of restraint's songbook: Curtis Lewis's "The Great City," a onetime Nancy Wilson vehicle Henderson personalized with Spanish lyrics, and Bart Howard's "Let Me Love You," which was also recorded by Johnny Hartman."I've always loved Shirley Horn's delivery," says Henderson. "There are a lot of layers to her singing."

"Ármame" is anchored by the great young pianist Sullivan Fortner, a friend and colleague since Lauren first arrived in New York. "Not all pianists are as good playing with singers as they are working as solo artists," she says. "He is." Bassist Eric Wheeler and drummer Joe Saylor of The Late Show with Stephen Colbert round out the rhythm section; the CD also features a strong set of soloists in alto saxophonist Godwin Louis, trumpeter Josh Evans, and guitarist Nick Tannura, plus percussionist Nanny Assis. 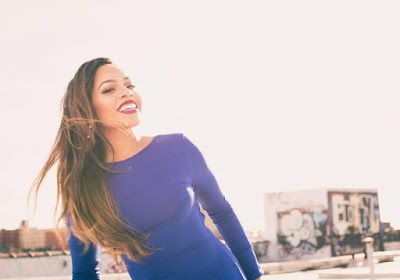 Lauren Henderson was born on November 5, 1986 in Marblehead, Massachusetts, a town outside of Salem. Her father, of African-American and Caribbean ancestry, and her mother, the daughter of immigrants from Panama and Montserrat, are lovers of jazz and Latin music and exposed their daughter to these and other genres when she was growing up.

While at Wheaton College, where she double-majored in Music and Hispanic Studies, she says, "I discovered my voice." Enrolling in classical voice and musical theater classes, she became the musical director of a gospel/R&B singing group and a member of the school jazz band.

Henderson spent a year abroad in Mexico, where she studied the traditional music of the Yucatán at Benemérita Universidad Autónoma de Puebla, and in Spain, studying flamenco singing and dancing at La Universidad de Córdoba. After graduation, she moved to New York and got a day job with MTV, studied with such jazz notables as Paquito D'Rivera, Barry Harris, and Jane Monheit, and began performing at jazz clubs and restaurants.

Her first album, "Lauren Henderson" (2011), which featured Fortner, included funky treatments of "Skylark" and "Born to Be Blue" among more traditionally rendered standards. DownBeat touted Henderson as "an inviting singer whose low-level dynamic draws the listener in." JazzTimes compared her to Peggy Lee, saying she appreciates "how to swing hard without swinging too hard."

"A La Madrugada" ("At Dawn," 2015), which she produced and arranged, featured an expansive cast of players, Fortner among them, and seven original songs including the sleek, smoothly grooving "Accede." Acting on a hunch, Henderson sent a copy of "A La Madrugada" to Mark Ruffin while he was a music supervisor on the indie film The Drowning. Ruffin was able to place "Accede"onto the soundtrack and would eventually produce "Ármame."

"I love her tone, her heritage, the quality of her voice," says Ruffin. "She's so talented, and one of the smartest singers I've ever worked with when it comes to the business of music. Also, there are very few folks singing in Spanish the way she swings it. I thought that was something that could not only expand her audience, but also expand jazz."

Henderson, who divides her time between New York and Miami, changes her approach to music depending on her audience. "Everyone has a different level of experience with Latin music," she says. "In Miami, with its strong Cuban presence, I sing very differently than I do in New York, where the cultural influence is so much broader. It's partly a matter of brightness versus darkness."

Lauren Henderson performed a CD release concert at Regattabar in Cambridge, MA on Friday 3/30. Upcoming New York City shows include the Blue Note, Sun. 5/27, 11:30am, and Minton's on Sat. 8/4, 7pm.
Posted by Arnaldo DeSouteiro at 11:29 PM