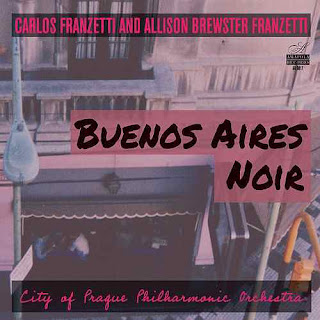 A sublime three-movement symphonic poem for piano and orchestra. Franzetti reaches his peak as a classical composer, a master in the same level of Brouwer, Scriabin, Delius and Ogerman, while his wife Allison displays her virtuosistic talents as one of the world's greatest pianists.

"This work is based on my earlier tango ballet Dante Porteño," says Carlos, "and takes place during the last three nights of Carnaval in the Buenos Aires of the 1970's as the dirty war between the urban guerrillas and military juntas reached its fiercest point."
Posted by Arnaldo DeSouteiro at 9:30 PM