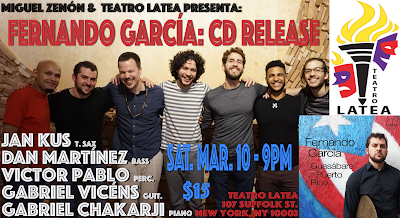 Puerto Rican drummer, composer, and bandleader plans to release his third album this year. It showcases his talents as a drummer and composer, as well as his ability to unite an amazing group of energetic musicians from the New York City Latin-Jazz scene. It also features the Grammy-nominated and MacArthur Fellow Miguel Zenón.