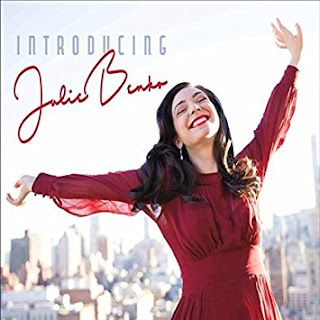 Spellbinding songstress Julie Benko steps into the spotlight with the release of her debut album, "Introducing Julie Benko," a diverse eleven track collection of jazz standards and original compositions that displays her sweet and scintillating signature soprano voice. The program includes some GAS classics like "Love For Sale" and "I Love Paris" but, curiously, the highlights are her sensitive interpretations for such lesser known songs as Fred Hersch/Norma Winstone's "A Wish," John Denver's "Leaving On A Jet Plane" (recorded by Frank Sinatra on the "Sinatra & Company" album), a couple of Gene de Paul/Johnny Mercer's gems ("Lonesome Polecat" and "Wonderful, Wonderful Day") and two of her originals ("Here We Go Again" and "Always.")

When Julie Benko ambled into a Starbucks café in New York City's Herald Square and struck up a conversation with the man sitting next to her, she could never have anticipated the collaborations both personal and musical that would follow. The man was jazz pianist/composer and Berklee College of Music faculty member Jason Yeager, and the two began to make music together. After informal sessions of Great American Songbook standards and Joni Mitchell gems, the two artists developed their own duo cabaret act entitled "Blame It On Our Youth," performed in New York, Connecticut, and Massachusetts.

Their professional collaboration evolved into a personal romance. Now, coming full circle, they have teamed up to record Ms. Benko's debut jazz album.

As a child, Ms. Benko would watch classic movie-musicals with her mother and listen to the music of Ella Fitzgerald and other jazz greats with her father. An accomplished singer and actress, Ms. Benko explores the cross-section of these two early influences: jazz and musical theater.  Specifically, she is fascinated by songs from the musical theater canon that did not manage to make the elusive "crossover" leap into jazz. Thus, Ms. Benko performs a swinging "Matchmaker, Matchmaker" from Fiddler on the Roof (in which Ms. Benko recently appeared on Broadway), featuring Dan Levinson on a klezmer-style clarinet. She also explores two songs from Johnny Mercer's movie-musical Seven Brides For Seven Brothers -- "Lonesome Polecat" and "Wonderful, Wonderful Day" get dramatically and excitingly reinterpreted.

The jazz standards included on Ms. Benko's album have received unpredictable arrangements by Mr. Yeager. "Love For Sale," performed as a melancholy tango and featuring Jason Anick on violin and JP Jofre on bandoneón, evocatively captures the cynicism and sadness of the world's oldest profession. "I Love Paris" utilizes the exuberant and contrapuntal New Orleans-style three-horn front line (featuring standout performances by guitarist Vinny Raniolo, trumpeter Andy Warren, trombonist Walter Harris, and clarinetist Dan Levinson) to express the joy of love. "I Can Dream, Can't I?" gets a bossa nova treatment -- with a saxophone commentary from Andrew Mulherkar -- to express the wistfulness of the lyric. Fred Hersch's contemporary art song "A Wish" features an intimate trio arrangement with voice, piano, and cello (lyrically delivered by Alon Bisk). Ms. Benko also covers the folk-rock classic "Leaving On a Jet Plane" in an introspective jazz setting, accompanied by the album's stalwart rhythm section of Mr. Yeager on piano, Danny Weller on bass, and Jay Sawyer on drums. This John Denver classic reminds her of the many times she has left loved ones at home in order to pursue her passion of performing.

Benko's original compositions, which emerge from the tradition of the Great American Songbook, are often responses to current events. She wrote "Tomorrow Is A Day For You" as a celebration following the US Supreme Court decisions defending same-sex marriage, and "Here We Go Again" was a response to the troubling and seemingly endless political campaigns of 2016. On the other hand, the poignant album-closer, "Always", which is fittingly performed as a cozy duo with Mr. Yeager, is a love song written soon after the two became a couple.

With the help of her co-producer and partner Jason Yeager and the impressive line-up heard on this debut release, Julie Benko emerges as a diverse and innovative jazz and musical theater vocalist, composer, and producer.

Julie Benko is an actress, singer, and songwriter based in New York City.  She has worked on Broadway, national tours, and in regional theaters across the country.  An honors graduate of New York University's Tisch School of the Arts, she is constantly involved in developmental readings and workshops of new works at venues throughout New York City. In February of 2017, Julie won both the Gold Medal and the Johnny Mercer Award in the prestigious American Traditions Competition.  Her debut recording, co-produced and arranged by jazz pianist Jason Yeager, is due to be released later this fall.

Career highlights include performing in Broadway revivals/national tours of Les Miserables, Fiddler on the Roof, and Spring Awakening, demonstrating her piano skills as Girl in Once at Weston Playhouse, creating the starring role of Rebeca Frankel in Barrington Stage Company's world premiere musical The Golem of Havana (a 2015 IRNE Best New Play nominee), and singing alongside the stars at the 85th Academy Awards ceremony.  Other roles include Bella in Rags at Theater Works Silicon Valley, Cosette in Les Miserables at Amarillo Opera and North Carolina Theater, and Olive in The 25th Annual Putnam County Spelling Bee at the Downtown Cabaret Theater.

Julie has performed her autobiographical one-woman show Wandering Star and her jazz duo show Blame It On Our Youth (with Jason Yeager) at sold-out venues across the Northeast, including Joe's Pub, Don't Tell Mama, and more. Her song "Thanksgivvukah" was featured on CNN's Belief Blog as the seventh of "Eight Ways to Celebrate" the once-in-a-lifetime holiday.

Julie regularly volunteers her vocal talents with Sing For Your Seniors and VocalEase, organizations that provide senior centers and nursing homes with Broadway-level entertainment at zero cost. She is the proud guardian of "retired" street cat Thelonious Monk, to whom she lovingly refers as Monkey the Cat.
Posted by Arnaldo DeSouteiro at 9:24 AM