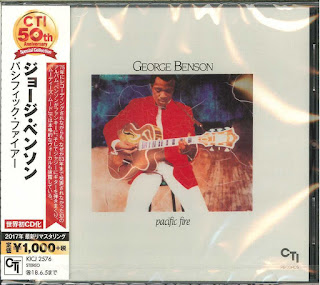 CTI fans have waited three decades for a CD reissue of "Pacific Fire." Now it finally appears on digital format, as part of the low-budget CTI 50th Anniversary Special Collection. But without the back cover... Actually, the "cover" is just a reproduction of the front cover photo of the original vinyl LP issue, printed on a single cardboard sleeve, with a promo text for the series on the back. This bizarre lack of respect with the consumers and the artists happens in all the CD titles of this series.

Anyway, since there's no other CD issue available of this rare album, it will probably sell well.

And the music content is great, although it's a collection of out-takes from the same sessions (recorded between July and October 1975 at the Rudy Van Gelder Studios) that yielded the Grammy-winning album "Good King Bad," arranged by David Matthews.

The album opens with the only track previously available on CD, a killer version of Eddie Floyd's "Knock On Wood" that I have included in a best-selling compilation I produced in 1997, titled "CTI Acid Jazz Grooves." It features smokin' solos by Benson and former James Brown's trombonist Fred Wesley, invited to the sessions by David Matthews, who had worked as Brown's musical director & arranger in the late 60s/early 70s.

The title track, "Pacific Fire," was recorded on the very same day, featuring a terrific Rhodes solo by its composer, Ronnie Foster. Then a member of Benson's touring band, Foster also contributed two other songs: the latin-tinged "Bandoleros Caballa" and the mellow ballad "Let Your Love Come Out."

My personal favorite track is James Moody/Eddie Jefferson's "Moody's Mood" (Jefferson is uncredited on this CD reissue!), featuring a beautiful guitar/vocal unison solo by Benson, and a gorgeous acoustic piano solo by Roland Hanna, with the unobtrusive support of Dennis Davis' sparse drums. Many years later, Benson would recorded another nice version of "Moody's Mood," shorter and more pop-oriented, in a vocal duet with Patti Austin for the "Give Me The Night" album.

Another highlight, "Melodia Español," is a duet improvised at the spur-of-the-moment by Benson and Hubert Laws.

The album closes with an alternate take of Philip Namanworth's "Em," which includes some odd synthesizer effects.

An essential item for both Benson and CTI fans, despite the terrible CD artwork.
Posted by Arnaldo DeSouteiro at 9:25 AM