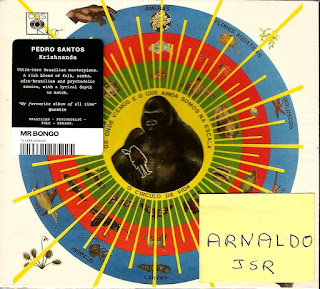 "My favourite album of all time" - Quantic

Krishnanda is an album in the truest sense of the word – a spiritual, psychedelic Brazilian masterpiece from start to finish – celebrated by everyone from Seu Jorge and Kassin to Floating Points, Madlib, Quantic, Gilles Peterson and DJ Nuts. These days, originals change hands for thousands of dollars.

My much missed friend Pedro Mello dos Santos (1919-1993) -- aka Pedro Santos aka Pedro Sorongo, to whom I was introduced by radio DJ Simon Khoury and guitarist Sebastião Tapajós in 1980 -- was a percussion virtuoso, composer, lyricist, singer and inventor of dozens of percussion instruments that apparently included oddities such as the mouth berimbau whistle. Nicknamed Perdo ‘Sorongo’ after the rhythm he invented, that features throughout "Krishnanda." A highly spiritual man who was regarded as a philosopher by many.

In the same vein as Verocai and his debut solo album, "Krishnanda" was Pedro’s chance to shine with his own, and only, album as a leader. [He also recorded an extremely rare single for Philips in 1967 and some duo projects with Sebastião Tapajós.]

"Krishnanda" was produced by another Brazilian legend, drummer Hélcio Milito (Tamba Trio's founding member and by then working as A&R at Brazilian CBS), and arranged by conductor Joppa Lins (aka Pacheco Lins aka Maestro Pachequinho aka Don Pacheco!!!), and originally released in 1968 on CBS. Musically, the album touches folk, samba, afro-brazilian and psychedelia plus added effects, with a lyrical depth and diversity to match; themes including morality, perception, existence and ego.

Despite the genius of the record and the influence that it had on musicians at the time of release, it disappeared into obscurity. "Krishnanda" is an exotic gem that features poetic lyrics mystical perspective under a different linguistic structure. The sound diversity of the album is very large, there are many types of percussion instruments, strong horn arrangements from samba rhythms and Latin and Eastern almost the same time, sometimes a string section, animal sounds and ambience of a forest, a psychedelic organ, a guitar with similar to a zither, xylophones and instruments designed and built by Pedro himself.

"We first discovered the record around 2003, through a friend Julio Dui," says David Buttle, founder of Mr. Bongo label. "Around that time Brazilian funk and bossa was the flavour of the day, so didn’t catch our ear immediately, however it continued improve with age and now we consider it to be one of the best albums ever made, regardless of genre or origin."

The Mr Bongo reissue is produced was remastered by Ricardo Garcia at Magic Master Studio (Rio de Janeiro), with its artwork restored by Andrew Edwards, from the original copy borrowed from Julio Dui. Digipak cover including a 4-page b&w booklet including lyrics. A real masterpiece.
Posted by Arnaldo DeSouteiro at 8:10 PM