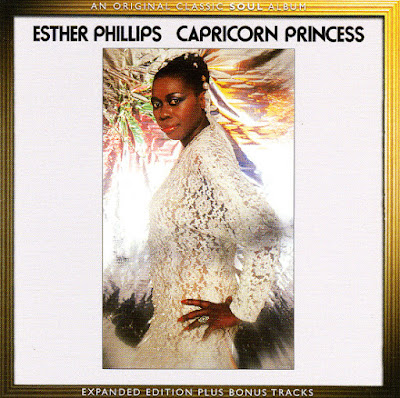 After the recent European CD reissue of Kathy McCord's debut album (till now released only once on CD in Japan, back in 1999, and longtime out-of-print), another vocal gem of the CTI catalog re-appears on CD format: "Capricorn Princess," the last of seven LPs recorded by extraordinary singer Esther Phillips (1935-1984) for CTI's subsidiary Kudu label.

Like on previous reissues, the loud digital mastering quality is not perfect, though. The sound is clean and transparent in most of the tracks, specially on the ballads "I Haven't Got Anything Better To Do," "Candy" (which includes an unbelievable spoken intro) and "A Beautiful Friendship," but the disco-oriented tunes received heavy compression, to the point that the opening track, "Magic's In The Air," sounds dull and very noisy, with a terrible drum sound. Anyway, an essential CD for all CTI/Kudu collectors and Esther's fans.

Esther was an underrated & unmistakable vocal stylist, but also a peculiar character, and there were many behind-the-scenes facts before & during the very expensive recording sessions that took place at two different studios (Mediasound in New York, Rudy Van Gelder in New Jersey) between May and September, 1976.

It's a massive set, a melting pot of jazz, r&b, pop, funk and disco, including potential dancefloor hits and haunting ballads such as "I Haven't Got Anything Better To Do," previously covered by bossa nova princess Astrud Gilberto for Verve as well as by tenor sugar sax player Stanley Turrentine for CTI on "Salt Song."

Not to mention that Brecker Brothers, Sam Burtis, Ronnie Cuber, Jon Faddis are found playing together on the horn section. And Bill Evans' former bassist Chuck Israels plays arco bass as a member of the string section!

However, nothing could be more unexpected than the presences of two young artists that Creed had just signed to the CTI cast. And since Creed always followed the formula "a sideman one day, a leader the next," he invited electric violinist John Blair (the creator of the "vitar" instrument) and Allan Holdsworth to the proceedings.

Nobody ever could have imagined to listen to the British guitar hero in an Esther Phillips album!!! But his appearance was quite discreet, playing pedal steel guitar on Janis Ian's "Boy, I Really Tied One On," one of the disco-numbers chosen to be released as a single.

It is not a coincidence that both Esther and Allan had started to record their albums ("Capricorn Princess" and "Velvet Darkness," respectively) on that same May of 1976 at the same Van Gelder Studio.

On its turn, John Blair shines on both "I Haven't Got Anything Better To Do" and "A Beautiful Friendship" (doing a very "economic" solo on the top of a large string section), a song that Esther tried to record in 1971 on her CTI debut, "From A Whisper To A Scream," but had been deleted by Creed during the mix sessions. But, when Didier Deutsch produced the first CD reissue of that album, in 1988, he was able to access the access the original tapes and added four previously unreleased tracks that had been left out of the LP. "A Beautiful Friendship" was among them, but in a completely different arrangement from the one heard on "Capricorn Princess."

Curiously, however, despite the many expectations and plans that Creed had for John Blair and Allan Holdsworth, they only recorded one album each for CTI (Blair's album was "We Belong Together" that came out in 1977 and will be reissued on CD for the first time next September -- in Japan, of course,,,) Blair did another sideman appearance for Creed, on Lalo Schifrin's "Towering Tocatta," but Holdsworth only guested on Esther's "Capricorn Princess."

Besides "Boy, I Really Tied One On," another groovy highlight is Trevor Lawrence's "Higher and Higher," propelled by the tight rhythm section (Don Grolnick on Hohner clavinet, Jeff Berlin's pumping bass, Andy Newmark on drums and John Tropea on guitar), with Joe Farrell doing the flute solo.

It's not a secret that Phillips was adept at singing blues, early R&B, gritty soul, and jazz. Her voice had an idiosyncratic, nasal quality that often earned comparisons to Nina Simone, although she herself counted Dinah Washington as a chief inspiration. On her turn, Aretha Franklin always idolized Esther and mentioned her as a big inspiration.

Phillips' career began when she was very young, under the artistic name Little Esther, and by some accounts she was already battling drug addiction during her teenage years; whenever her problems took root, the lasting impact on her health claimed her life before the age of 50. And, IMHO, she reached her artistic heyday under the aegis of Creed Taylor during her Kudu years. 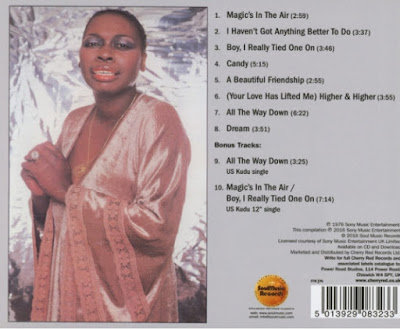 Posted by Arnaldo DeSouteiro at 9:01 PM