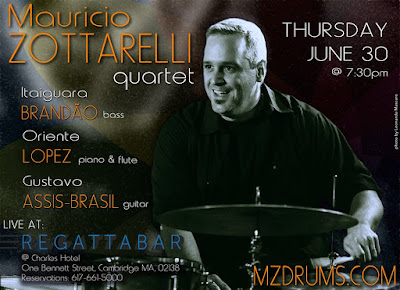 One of the world's greatest drummers in the contemporary jazz scene, Mauricio Zottarelli performs a rare concert as a leader tonight, June 30, 7:30pm, @ Regatta Bar at Charles Hotel in Cambridge, MA.

Brazilian born, New York City-based drummer/composer Mauricio Zottarelli has been on the forefront of the Jazz, Latin and Brazilian music scenes for many years. Called a "superb drummer" by JazzTimes magazine, Zottarelli comes from a musical family and was born in Santos, SP, Brazil, but grew up in Rio Claro, SP in a highly musical environment.

His first few years as a professional musician consisted of many performances throughout his native country as well as studio and session work with different artists and bands. At the same time, he pursued a degree in Computer Science, and concluded his studies in 1997.

Mauricio moved to the U.S. in 1999 after winning a scholarship award to study at Berklee College of Music, in Boston, MA. He majored in Film Scoring, Performance and Arranging, and graduated from the prestigious college in 2002.

Mauricio is a critically acclaimed and award-winning drummer and artist. Since his move to New York City in 2006, he has become one of the most sought after drummers on the scene. Zottarelli is credited in more than 70 albums so far in his career, and has worked and shared the stage with some of the most important and notable artists of today, crossing over many musical styles.

Also very active as a bandleader and composer/arranger, Mauricio co-leads and collaborates with several projects, such as the Dig Trio - with guitarist Gustavo Assis Brasil - which released its first CD in 2003 to great reviews from critics and audiences alike.

In 2011 Zottarelli released MOZIK - a collaboration with pianist Gilson Schachnik and also featuring Gustavo Assis Brasil, Fernando Huergo and Yulia Musayelyan. The album has garnered praises from many important jazz/music publications such as Downbeat magazine and All About Jazz.

The prestigious Jazz Station Blog, written by journalist/producer Arnaldo deSouteiro, considered MOZIK the #1 new talent of 2011 and included the CD in their TOP 15 best of 2011. The blog also listed Mauricio in their Top 10 Drummers Of The Year list four years in a row, from 2011 to 2014.

In 2012, Mauricio won the prestigious Brazilian Music Awards (Prêmio da Música Brasileira), the most important music award in Brazil, with artist Dom Salvador and his album "The Art of Samba Jazz". In 2014, Mauricio released another collaboration - this time with bassist Amanda Ruzza. The album is called "Glasses, No Glasses", and it is a free improvisation, live-in-the-studio recording with special guest, pianist and multi-instrumentalist Léo Genovese.

Following his growing interest in music education, Mauricio teaches regularly in the NYC area, and has done workshops/clinics in Brazil, Europe and the USA. He has also taught at the world-famous Brazil Camp in California, and he is a regular columnist/writer for Modern Drummer Magazine in Brazil.
Posted by Arnaldo DeSouteiro at 10:45 AM