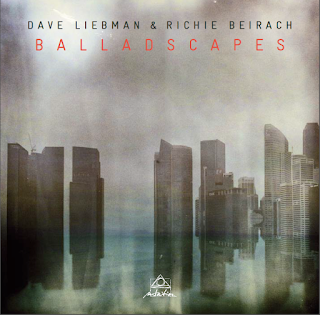 Although I was a big fan of Dave Liebman's artistry since I heard him with Miles Davis in my native Rio, the first time I became aware of his partnership with Richie Beirach was exactly 40 years ago, when their "Forgotten Fantasies" duo album for John Snyder's Horizon label was, for some miracle, released in Brazil in 1976. I remember listening to that vinyl over and over again, deeply impressed by their deep interplay on such complex tunes like the 13-minute long "Obsidian Mirrors," my personal favourite track.

Since then, I kept both Liebman and Beirach under my radar not only when they performed together -- like on those memorable albums by their Quest group and on that fantastic "Tribute To John Coltrane - Live Under The Sky" CD/LaserDisc (filmed in Japan with a quintet completed by Wayne Shorter, Eddie Gomez and Jack DeJohnette) that later was reissued on DVD -- as well through the listening of their individual projects. I even had the privilege to attend some clinics and masterclasses conducted by Liebman at IAJE conventions when we were both members of the now-defunct International Association of Jazz Educators.

Both Liebman and Beirach also were often included among the "top artists of the year" in the annual Jazz Station Awards, initially presented in my weekly column in the Tribuna da Imprensa newspaper, and later also on the cyberspace through this website.

In 2015, for example, Liebman was elected #1 soprano sax player in the 37th Annual Jazz Station Awards, for his "The Puzzle" album (Whaling City), while Beirach appeared among the top piano players thanks to his "Varuna" CD with Laurie Antonioli (Origin), also voted among the best albums of the year.

Now I'm mesmerized by their new outstanding duo project, "Balladscapes," produced by Kurt Renker, recorded in April 2015 and released in April 2016 by the Intuition label. Like on my desert island disc "Forgotten Fantasies," Liebman plays flute, soprano and tenor sax, with Beirach focused on the acoustic piano. No acrobatics, just the essence of expressiveness.

The program includes four astounding originals, some standards ("For All We Know", "Moonlight In Vermont," the enchanting "Lazy Afternoon") and jazz classics -- from Billy Strayhorn/Duke Elington's "Day Dream" to John Coltrane's "Welcome/Expression", from Wayne Shorter's "Sweet Pea" originally recorded by Miles Davis to bossa nova master Antonio Carlos Jobim's "Zingaro" made famous by João Gilberto --, and even a J.S. Bach piece ("Siciliano," from Sonata No. 2 in E-flat major for flute and harpsichord.) It's haunting music of the highest caliber. But it's also sublime poetry of the highest sensitivity.
************
Almost 50 years. An eternity. Lyndon B. Johnson was still president, the Beatles were on the stage for a concert for the last time and the film "My Fair Lady" won eight Oscars. Half a century. Dave Liebman and Richie Beirach have known and appreciated each other as persons and partners for that long. The now 69-year-old soprano and tenor saxophonist and his 68-year-old partner on the piano got to know each other at a jam session at Queens College in New York. Two hungry students, intoxicated, euphoric and inspired by all the jazz greats, who expanded the horizon for the musicians of that time.

The two met on a regular basis, either in Liebman's loft on 19th Street in Manhattan or in Beirach’s pad on Spring Street. They helped each other to work out each one’s own vocabulary. They mostly played free jazz in the style of late Coltrane, tried everything possible, let themselves go and gradually found a common inner pulse. Sometimes the bassist Frank Tusa also came by and complemented the creative "hanging out" relationship. However, it was not until 1973 that the “soul mates” recorded their first joint record. Liebman was on tour with Miles Davis in Japan at the time when he ran into Beirach, who was on tour with Stan Getz at the same time. Along with Jack DeJohnette and Dave Holland, they finally recorded Liebman's debut album "First Visit".

One song from that session stayed in the mind of the friends to this day: "Round Midnight". It was the very first duet of countless others that were to follow over the next 43 years, either in live performance with the bands Lookout Farm and Quest or in other joint projects. "Because a duo," legendary producer Michael Cuscuna wrote in the liner notes to Balladscapes, “is probably the purest and most direct form of musical dialog. It gives those involved a certain form of freedom, which they can use for seemingly endless solos full of color, emotion and depth and eventually lose themselves in it. Everything that Dave and Richie make together possesses a great deal of substance and intelligence, completely independent of the respective context or genre."

Although Dave Liebman and Richie Beirach enriched their musical dialogs regularly with ballads over the past decades, Balladscapes is but the first pure ballads album on a long shared path. But whoever knows the musical vita of the adventurers already suspects that even this digression need by no means automatically end on the smooth paved road of the mainstream.

The 13 songs recorded in the CMP Studio in Zerkall include both some new and old original compositions such as "Quest" and "Kurt country", but also unorthodox arrangements of Johann Sebastian Bach ("Siciliana"), Kurt Weill ("This Is New"), Antonio Carlos Jobim ("Zingaro"), Wayne Shorter ("Sweet Pea"), Billy Strayhorn ("Day Dream") and, of course, John Coltrane ("Welcome/Expression").

A rich, wide field opens on which the soprano saxophonist (who also plays the tenor saxophone and the flute here) and the piano rub against each other, intertwine and back each other up in an optimally coordinated, familiar, but always dignified dialog to their hearts’ content.

"In each of my previous bands in which Richie was involved, he had the function of an anchor, more than any bassist or drummer," Dave Liebman praised the special qualities of Beirach. "Because his timing is just perfect!" As a result, the interplay on Balladscapes is also based on an inner symmetry, which people can only develop together when they know and like each other. For nearly half a century.
Posted by Arnaldo DeSouteiro at 12:30 AM