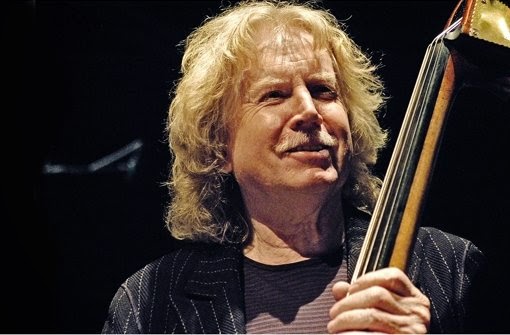 Nancy Ruhling talks to the saxophonist Carol Sudhalter about her musical family, about her decision to become a musician even though her parents had other plans for her, about the sad realities in today's music business and yet the fun to be part of it all ( Huffington Post). --- Jürgen Overkott talks to the Swedish trombonist Nils Landgren about the public image of Sweden, about the beginning of his career as a studio musician for the pop band Abba, about his red trombone and about his engagement for social projects in Africa ( Der Westen).

Knut Henkel talks to Avishai Cohen , or rather, he talks to both Avishai Cohens, the bassist as well as the trumpeter ( Jüdische Allgemeine). Bassman Cohen tells him that the Israeli jazz scene got livelier when musicians like Anat Fort and him returned from America. Trumpetman Cohen, we learn, sounds more like a New Yorker than an Israeli musician, yet insists that, of course, there are influences from Israel in his music as well. --- Gregory Robinson talks to the bassist David Chevan about the concept behind the band Afro-Semitic Experience, which tries to take a different take on the Jewish musical tradition and in their new album has approached the music of John Coltrane ( The Jewish Week). The Afro-Semitic Experience, says Chevan, came from the idea "that a musical dialogue is a good place to start an intellectual dialogue as well".

Jon Garelick talks to the pianist and singer Sarah McKenzie about what she learned while studying at Berklee College, about her initiation to jazz in her native Australia, about the influence of Oscar Peterson's style, and about the importance of believability in jazz singing ( The Boston Globe). --- Jason Lipshutz reports that the smooth jazz saxophonist Kenny G might be "partially responsible" for the idea of the Starbucks Frappuccino, a company he had invested in early in its existence ( Billboard).

John Schreiber reports about a law suit by Samantha Cesena who was engaged to the saxophonist Stan Getz when he died to remove the trustee of the trust established on her behalf because she has not been paid her monthly payments since July 2013 ( My News LA). --- Karin Schütze talks to the Portuguese singer Maria Joao about a new project with the Upper Austrian Jazz Orchestra, about the difference between Austria and Portugal, about not being a Fado singer, about the hardships of the music business, about her initiation to jazz and about finding balance in Aikido ( Nachrichten AT).

Calvin Wilson talks to the pianist Kenny Barron about having played more duets recently, especially with the vibraphonist Stefon Harris, and about being willing to take more chances as he grows older "and just see what happens" ( St. Louis Post-Dispatch). --- The celebration of Eberhard Weber in Stuttgart last week was recorded by German TV and broadcast online - a heartfelt and wonderful tribute featuring Gary Burton, Pat Metheny, Jan Garbarek, the SWR Big Band and speeches, especially one by the trumpeter Manfred Schoof and a more than adequate response by Weber himself who even though he can't play anymore after a stroke, sat on stage for the whole concert ( SWR). Hans Hielscher hears Eberhard Weber's latest CD and reads his new autobiography ( Spiegel Online).

Amy Wilder talks to the saxophonist Branford Marsalis about his recent solo album, about the importance of studying recordings, about the power of melody, about listening to music without expectation of a musical reward in the end, about musical curiosity and the universality of music, about other career aspirations in his youth (lawyer, politician, football player) and about the surprise of his family when he decided to become a musician ( Columbia Tribune). --- Cormac Larkin talks to the Danish bassist Jasper Høiby about his trio Phronesis, about it having been compared to the Esbjörn Svensson Trio, about their concerts in the dark, and about the concept of Phronesis not being that of a traditional piano trio ( The Irish Times).

Peter Hum talks to the drummer Matt Wilson about how music and the music world helped him to deal with the loss of his wife ( Ottawa Citizen). --- Mark Prigg reports about the Georgia Tech researcher Mason Bretan who has programmed a "robot jazz band" to accompany human musicians ( Daily Mail). --- Sarah Foster talks to the young trombonist Austin Seybert ( The Daily Illini). --- Suzanne Hogan talks to the drummer Zack Albetta ( KCUR). --- Ullrich Riedler reports about jazz in 1950s Kassel, Germany ( HNA). --- Joshua Pichard looks at John Coltrane's recording of "A Love Supreme" ( Nooga); Jack Garner ( Democrat and Chronicle ) and Michael Gold ( Newsweek) remember "A Love Supreme" as well. --- Martin Fichter-Wöß talks to the Austrian singer Lia Pale ( Tiroler Tageszeitung). --- Ted Gioia recalls his first encounter with Keith Jarrett's "Köln Concert" and asks why the album still sounds as fresh today as it did 40 years ago ( The Daily Beast). --- Lothar Martin reports about the decision of Czech clarinetist Pavel Smetáček to retire from music ( Radio Praha). --- Ron Hart writes about the 1990s alliance between Blue Note recordings and hiphop ( The Wondering Sound). --- Michael Elkin talks to the British pianist and singer Jamie Cullum ( The Intelligencer). --- Louis Reitz talks to the German guitarist Alfred Hertrich ( Oberpfalznetz). --- Ben Ratliff attends a concert at the Metropolitan Museum in New York, during which musicians connect in different ways with the exhibited works of art ( New York Times). --- Peter Englot reports about the open job position as director of the Institute of Jazz Studies at Rutgers University in Newark, New Jersey, a search for someone who "needs to be part impresario and part scholar, someone who will immediately be seen as a major collaborator, advocate and cheerleader for jazz's bright future" ( Rutgers Today).

Our next JazzTalk concert on Friday, 6 February, will feature two exceptional vocalists, accompanied by the Martin Sasse Trio: the Cologne-based singer Alexander Gelhausen as well as the scat legend Willi Johanns . 81-year-old Johanns is one of the few authentic bebop singers in Germany ( YouTube). Gelhausen, who is a tad younger, scats as well but also uses a repertoire from the blues and the Great American Song Book.

Before the concert we will open a new exhibition called "Something Completely Different. Plakate!", in which the Jazzinstitut's visual art curator Doris Schröder has chosen exceptional examples of poster art advertising jazz ( Jazzplakate!). Ahead of the event, Thomas Wolff reports about the preparations for the exhibition ( Darmstädter Echo).

Our local newspaper has a column these days in which Darmstadt citizens comment on pictures from the Radenko Milak exhibition at Darmstadt's Kunsthalle museum. For one of the pictures Wolfram Knauer remembered the Challenger accident on 28 January 1986, and recalled the astronaut Ron McNair who died in the crash, only the second African American in space who had his saxophone with him as he had planned to perform a live feed from space to a Jean-Michel Jarre concert. ( Darmstädter Echo).

Over the weekend, Arndt Weidler met with colleagues from the Union Deutscher Jazzmusiker and the IG Jazz Berlin to prepare a study about living and working conditions of jazz musicians in Germany.

More progress in our preparations for the 14th Darmstadt Jazzforum. We are still collecting suggestions for this international conference which will focus on "Gender and Identity in Jazz", at which we will not just talk about women in jazz, though, but also about the image jazz has developed over the years, both within the jazz world and to outsiders, how they were shaped and how they change. Our call for papers is online until the end of the month; we invite suggestions for papers, lectures or other programmatic suggestions on the topic. Please refer to our website for the scope of the conference ( call for papers, Darmstädter Jazzforum).

We read ... Christina Maria Bauer's book "Livejazz in München" as well as Dean Alger's "The Original Guitar Hero and the Power of Music. The Legendary Lonnie Johnson, Music and Civil Rights". The review of these and other books can be found on the book review page of our website .
Posted by Arnaldo DeSouteiro at 9:38 PM