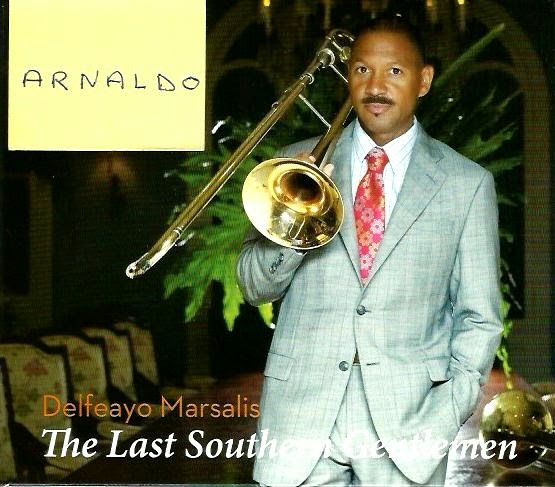 I've been following Delfeayo's career since we met in Tokyo, back in 1996, when he was recording his fantastic debut album as a leader, "Musashi," released on King Records' Paddle Wheel label. His masterpiece, "Sweet Thunder," came out in 2011, being voted one of the best albums of the year on the 33rd Annual Jazz Station Awards.
http://jazzstation-oblogdearnaldodesouteiros.blogspot.com.br/2011_12_01_archive.html

Now, on "The Last Southern Gentlemen," he reunites with his father, New Orleans legend Ellis Marsalis, and they are renowned joined by drummer Marvin "Smitty" Smith and bassist John Clayton in a refined album just out on Delfeayo's own imprint, Troubadour Jass Records. Incorporating Delfeayo's writings - including an essay on the sociological/historical themes that define the recording, commentary on the music, and original stories, children's tales and poetry - "The Last Southern Gentlemen" offers up a detailed map of the bandleader's passionate interests and concerns. The CD artwork, by the fantastic Carola Straatman, from the Netherlands, is by far the most beautiful graphic design prepared this year for a jazz release.

"The Last Southern Gentlemen" signals a musical pinnacle for trombonist Delfeayo Marsalis, bringing him together for the first time on a complete recording with his father, pianist Ellis Marsalis. Yet in a broader sense, the project is also a sweeping reflection of a comprehensive artist. Incorporating Delfeayo's writings-including an essay on the sociological/historical themes that define the recording, commentary on the music, original stories, and poetry-The Last Southern Gentlemen offers up a detailed map of his passionate interests and concerns. Joined by two unimpeachable support players -- John Clayton on bass and Marvin "Smitty" Smith on drums -- Delfeayo and Ellis ruminate in relaxed, probing and always swinging fashion on eleven standards and two original compositions.

The focus on such durable standards as "Autumn Leaves," "But Beautiful, and "I Cover the Waterfront" speaks to the central theme of the project. The performances pay tribute, as Delfeayo writes, "to the humanity and humility at the center of the Southern lifestyle that birthed America's original music." Here is jazz that everyone in this deliberately multi-generational quartet felt comfortable with: cherished songs that Ellis Marsalis has been playing and perfecting for decades, material that the younger Delfeayo and his compatriots have had to master as studied virtuosos.

Yet for Delfeayo Marsalis, the manner of performance rather than the repertoire is what counts most. "Southern hospitality and manners were important aspects of the original New Orleans musical aesthetic," states this proud scion of the Big Easy, who still calls New Orleans home. "Throughout this recording our aim was to communicate a feeling of graciousness and sincerity, relaxation and gentility. The early jazzmen believed that the social and emotional aspects of the music defined great jazz performance much more than the techniques or academic analysis. Jazz should offer a direct communication between the artist and the audience."

This quality of unencumbered communication permeates "The Last Southern Gentlemen." Whether offering luxurious ballad statements on "She's Funny That Way" or "I'm Confessin"; romping through spirited takes on "That Old Feeling" and "Sesame Street" (here, bolstered by a funky New Orleans backbeat with tambourine and bass drum work from guest Herlin Riley); or laying into Delfeayo's easy-grooving "The Secret Love Affair" or younger brother Jason Marsalis' "The Man With Two Left Feet," the beauty of Delfeayo's tone and his improvisational surety, as well the insatiable swing of Smith and Clayton at all tempos, remain unmistakable.

As for the piano patriarch, Ellis demonstrates his enviable prowess and inimitable elegance throughout, including a well-deserved trio feature on "If I Were A Bell," and an intimate duet between father and son on "I Cover the Waterfront." "My father embodies the old school musical values: he gets right to the point of the matter, without any excess," the admiring trombonist says. "He had a great impact on my approach to interpreting the material. I became more relaxed, more conscious of telling stories on my instrument."

Combined with Delfeayo's fervent writings, the superb performances throughout blend to make "The Last Southern Gentlemen" a uniquely affecting recording. As personal a project as jazz albums come these days, it provides much to think about while offering a surplus of expressive and enchanting sounds.
Posted by Arnaldo DeSouteiro at 7:31 PM