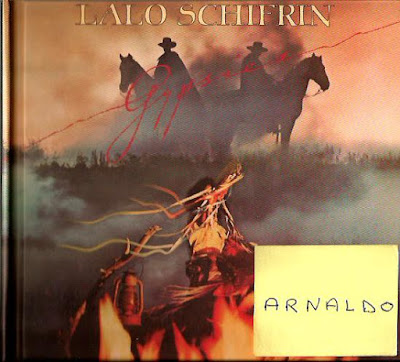 The first CD reissue ever of Lalo Schifrin's "Gypsies" (originally released on Clarence Avant' Tabu label in 1978) will come out November 14, initially only on the UK as part of the Tabu Records Re-Born Series. Besides the 8 tracks that appeared on vinyl, this deluxe expanded edition includes 3 bonus tracks: edited radio versions of "Moonlight Gypsies," "Fortune Tellers" and "Prophecy of Love."

One of the lesser known titles on Schifrin's huge discography, "Gypsies" has its origin detailed by the brilliant LA-based journalist A. Scott Galloway in an excellent essay that occupies 12 of the 16 pages of this hard-cover issue, manufactured & marketed by the London-based Demon Music Group, a BBC Worldwide company.

Galloway interviewed not only Schifrin and Tabu's founder Clarence Avant, but also many of the musicians that took part in the proceedings such as Abraham Laboriel (who tells the fantastic story of how he first met Lalo when still a kid in his native Mexico), Emil Richards, Ernie Watts etc, as well as Lalo's wife, Donna Schifrin and art director Art Sims.

"Gypsies" was the follow-up to those two incredible Lalo's jazz-meets-funk-and-disco albums for CTI ("Black Widow" and "Towering Toccata"), but didn't became a best seller, despite the fact that it was a big-budget project "sponsored" by CBS, Tabu's distributor at that time. Maybe because it didn't include any movie themes neither famous songs or adaptations of classical material. All tunes were composed by Schifrin specially for the project, "with the thread of a theme running throught it," on Galloway's words.

It's a pop instrumental album, not a jazz date -- although there are a few solos by Laboriel (on "Midnight Gypsies"), Parks ("King of Hearts"), and tenor sax player Anthony Ortega (on "Prophecy of Love") --  and finds Lalo playing piano, Rhodes and the vintage synthesizers Arp 2600, Mini-Moog and Yamaha CS 80. One year later, the Argentinian genius would record a second album for Tabu, the disco-oriented "No One Home," also to be reissued in UK in a few days.

Posted by Arnaldo DeSouteiro at 7:32 PM