One of the world's greatest guitarists ever, Jim Hall, has passed away yesterday aged 83. I was blessed with the chance to work with such jazz guitar icons as John McLaughlin and Larry Coryell, as well as with the underrated masters Gene Bertoncini and Jay Berliner. I grew up listening, in my childhood, to a genius named Wes Montgomery. I attented many unforgettable concerts by the virtuoso Joe Pass. However, "my jazz guitar man" always was Jim Hall, whom I considered the jazz equivalent to my beloved and much missed friend Luiz Bonfá. Both were the kings of subtleness, delicacy, refinement, lyricism, and were gifted with very special phrasings, full of sophisticated nuances and extreme expressiviness. For me, Hall was "the Bill Evans of the guitar."
There are a wealth of recordings available that act as prime examples of Hall's mastery -- the historic dates with Sonny Rollins (specially "The Bridge"), the magical duo albums with Bill Evans, the famous sessions with Chico Hamilton, Jimmy Giufree and Paul Desmond, the splendid "Power of Three" DVD with Michel Petrucciani & Wayne Shorter, the most recent collaborations with Pat Metheny etc etc.

But my personal favorite, among all Jim Hall's albums, is the legendary "Concierto" (CTI, 1975), his masterpiece and his best-selling project as a leader; an album that has been reissued more than twenty times all over the world, in many different formats as "normal" CD, DVD-Audio, SACD, SHM-CD and that now is being released, exactly today (December 11th), as a Blu-spec CD in Japan.
The fantastic interplay with Paul Desmond, Chet Baker, Roland Hanna, Ron Carter and Steve Gadd, the truly perfect Don Sebesky adaptation of Joaquin Rodrigo's "Concierto de Aranjuez," the engineering by Rudy Van Gelder, everything makes this Creed Taylor production a true magnum opus. [Some other great albums he did for CTI are "Big Blues" (1977, with Art Farmer) and "Studio Trieste" (1982, with Hubert Laws and Chet Baker), but both are available on CD only in the Asian market.]

Not surprisingly, I've written about "Concierto" more than any other album. I've selected "Concierto" for several CTI reissue series I supervised for the Asian market. And I still treasure my original vinyl LP copy, autographed by my idol in 1987, when I had dinner with him and his wife Jane Hall when they were in Brazil for a solo performance by Hall in a jazz festival in Rio de Janeiro. 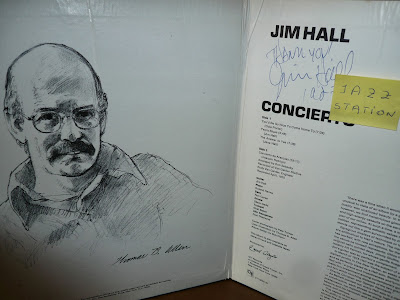 Later on, we met several times, mostly in the backstage of NY's Blue Note, but also in a couple of occasions in Los Angeles, when actress Lisa Marie Smith joined us for dinner. A gentleman and really lovely human being, quite apart from being a superb musician. 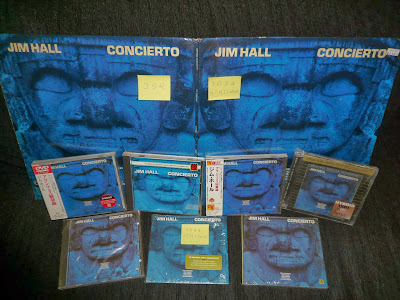 Below are the images of some other issues, and the links for some of those old posts.
http://jazzstation-oblogdearnaldodesouteiros.blogspot.com.br/2007/05/concierto-de-jim-hall-relanado-em-sacd.html

By Chris Barton for The Los Angeles Times

Guitarist Jim Hall, an understated yet profoundly influential presence on jazz guitar, died in his sleep Tuesday morning at his New York City home. He was 83.

Hall, whose career began in the '50s as part of the West Coast jazz scene with Jimmy Giuffre and Chico Hamilton, recorded with wealth of jazz royalty over his career, including Ben Webster, Ella Fitzgerald, Bill Evans and Sonny Rollins, who worked with Hall on his landmark 1962 album "The Bridge" as well as his celebrated 2011 live release, "Road Shows Vol 2."

The guitarist led his own trio since the '60s, and continued to maintain a busy recording and touring schedule. He appeared at this year's Newport Jazz Festival (joined by fellow guitarist Julian Lage) and was reportedly planning a duo tour of Japan with his frequent collaborator Ron Carter for January 2014.

Tributes and remembrances have been flowing through Twitter much of the day.  Saxophonist Charles Lloyd described Hall's death as "A personal loss of a kindred spirit whose sensitivity and humor buoyed my spirit," and local guitarist Anthony Wilson wrote, "You were all inspiration & elegance. A true master."

A full obituary will appear at
www.latimes.com/obituaries.
Posted by Arnaldo DeSouteiro at 6:16 AM