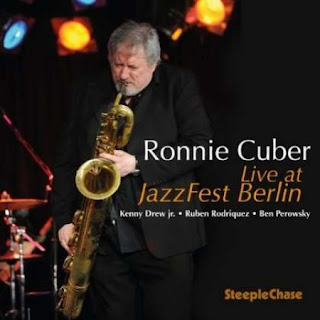 Recorded live (for a radio broadcast) at the Club Quasimodo @ "JazzFest Berlin" on November 12, 2008, and released now in 2013, this powerful & exciting CD focuses on Ronnie Cuber's playing in a straight-ahead context. "We did 2 hour-long sets and selected the best performances from each one," explains Cuber.

The quartet is pure dynamite, and Cuber's dexterity on the baritone sax is impressive; everythings sounds so easy for this giant that he seems to be playing his complex & vigorous solos in a melodica! These German sets bring me great memories of the time I used to attend, week after week in the early 90s, Cuber's gigs every Monday night @ Zanzibar in New York, with the all-star team of Lew Soloff, Mark Egan, Danny Gottlieb and the late Joe Beck, all my dear friends. Not to mention my huge collection of Ronnie Cuber's appearances as sideman on a hundred albums for people like Dom Um Romão, George Benson, David Matthews and Roland Hanna, most of them cut @ Van Gelder Studio under the aegis of producer Creed Taylor.

Horace Silver's classic "Tokyo Blues" would be worthy the CD alone. "It's a monster with a built-in groove," Ronnie says. But there's much more, including Clare Fischer's latin-tinged "Coco B" and a sample of Cuber's lyrical side on Herbie Hancock's soft & gentle "Tell Me A Bedtime Story," one of my personal favorite tunes since I heard Quincy Jones' marvelous version with Harry Lookofsky which I included on Quincy's "Summer In The City" CD that Arnaldo DeSouteiro produced for Verve in 2007.

Cuber decided to revisit his own tunes "Passion Fruit" (based on the changes of "Summertime", but done here in a completely different way from its original take from the classic fusion project of the same name released in 1985, and which became a best-selling CD in Japan) and "Arroz Con Pollo," while fiery pianist Kenny Drew, Jr. contributed "Things Never Were What They Used To Be" (a series of variations, as the title suggests, on Mercer Ellington's "Things Ain't What They Used To Be," a tune that Cuber recorded and often plays with Steve Gadd's band The Gadd Gang) and "Perpetuating The Myth," inspired by Thelonious Monk. Can't wait the day that Cuber will also re-work, in an acoustic mood, another gem from the "Passion Fruit" CD: "Love Notes," a beautiful song that Brazilian piano genius João Donato played for several years in the late 80s after I introduced it to him. Luv ya, Ronnie!
Posted by Arnaldo DeSouteiro at 10:35 PM