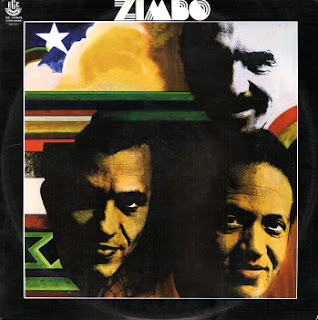 Next December 22, the Verita Note label will be reissuing in Asia, on CD format, many Brazilian albums from the 60s and 7os, most of them licensed from RGE. The highlight of the batch is one the best (and lesser known) albums in the discography of the legendary São Paulo-based Zimbo Trio: "Zimbo," a massive set recorded in 1976 by Amilton Godoy (aka Hamilton on piano), Luiz Chaves (bass) & Rubens Barsotti (drums) with two very special guests: Hector Costita (tenor sax) & Heraldo do Monte (guitar).

It's an one-of-a-kind album in Zimbo's long career, very peculiar in several aspects. First of all, there are no bossa nova standards in the repertoire, which includes only 7 extended tracks, full of memorable solos. Among the songs, two wondrous versions of Milton Nascimento's "Fé Cega Faca Amolada" and "Viola Violar," Paulo Tito's "Poliedro" (including a stunning drum solo by Barsotti), and stunning originals by the three founders of the group: Godoy's "Tudo Bem," Luiz Chaves' "Brincando," Rubens Barsotti's "Vai de Aracaju" and a theme co-written by Godoy & Rubinho Barsotti, "Laurecy, Até Já."

Besides the acoustic piano, Godoy also plays Fender Rhodes, which adds a fascinating "fusion" spice to the set. But it's essentially Brazilian in all aspects, and sounding more contemporary than any of Zimbo's other albums. Btw, now I would love to see, in a near future, the reissues of other great Zimbo albums that transcended the bossa boundaries, such as the two volumes of "Opus Pop" (with fabulous orchestrations by Cyro Pereira and splendid vocals by the long forgotten Clelia Simone) that they recorded for Philips.

That same day, Verita Note will be releasing a CD by jazz bassist Harvie Swartz ("Too Late Now") and Phil Collins' DVD "Going Back -Live At Roseland Ballroom, NYC".
Posted by Arnaldo DeSouteiro at 4:42 AM