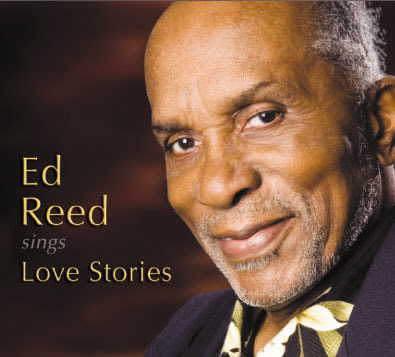 Jazz history is full of prodigies whose early promise was cut short by drugs, prison, or premature death. Much rarer is the late bloomer, the artist who, after years or even decades of being derailed by personal problems and the pitfalls of the jazz life, fulfills his talent. Enter Ed Reed.

Critic Andrew Gilbert has written that the Richmond, California resident is a "jazz singer in the truest sense." Drummer Tootie Heath called Reed "a great new voice." And singer Sheila Jordan told him, "The entire world needs to hear you because you're wonderful."

Reed's remarkable new CD, Ed Reed Sings Love Stories, on his own Blue Shorts label, is testament not only to his musical gifts but his grit and good fortune in having survived and overcome long-term heroin addiction as well as four stints in San Quentin and Folsom prisons. "This is a dream," Reed says of the ecstatic reception the CD is receiving.

Ed Reed Sings Love Stories was produced by Bud Spangler, a veteran of the San Francisco/Oakland Bay Area music scene (as disc jockey, drummer, and record producer), and co-produced by multi-instrumentalist Peck Allmond, who'd first heard Reed sing at Jazz Camp West in 2005 and convinced him that he needed to record. Spangler and Allmond convened a simpatico band for the session -- pianist Gary Fisher, bassist John Wiitala, drummer Eddie Marshall -- and worked with Reed in selecting the CD's sophisticated and challenging repertoire.

"They're beautiful, and they tell a great story," says Reed of the album's songs, which include "Daydream," "A Flower Is a Lovesome Thing," Thelonious Monk's "Ask Me Now," "If the Moon Turns Green," and "Goodbye." The CD's opening track, "A Sleepin' Bee" (by Harold Arlen, with lyrics by Truman Capote), has special resonance for Reed; he learned the song, in fragments and over a six-month period, while in prison, "and I've loved it ever since."

"His time, phrasing and intonation are so beautiful," Peck Allmond told writer Andrew Gilbert in the Contra Costa Times. "When you think of the great jazz singers, Billie, Ella, Andy Bey, they're not out front. They're right there in the music, and Ed is like that. He wasn't approaching music as 'I'm a singer.' He was a musician. And there's a time-capsule element, because of his incarceration. It took a long time for his music to get out to the world, and when it did, it was fully formed."

Ed Reed was born in Cleveland, Ohio in 1929 and grew up in Los Angeles, where his father worked as a waiter on the Southern Pacific Railroad. Ed's first music lessons, at 11, came from teenage bassist Charles Mingus, whose sister lived across the street from the Reeds. "He taught me how to hear music, how to sing chord changes," says Reed.

Ed was introduced to Charlie Parker on record in 1944, and later heard Parker and Dizzy Gillespie at a Hollywood club. He started singing around town on amateur nights at the Lincoln Theater ("I never won; Ernie Andrews was always winning"), and later in talent nights hosted by pianist Hampton Hawes at the Club Alabam and other venues.

At 17, Reed joined the army and, while stationed at Oakland Army Base, began using heroin. After leaving the service, he sang briefly with a band led by his neighbor, trumpeter Dupree Bolton, but "We were always squabbling over heroin. None of us could keep it together." It would be another 40 years or so before Reed earned another dime from singing.

Between 1951 and 1966, Reed did three stints in San Quentin Prison and one in Folsom. During his last incarceration at San Quentin (1964-1966), he sang in the Warden's Band, with Art Pepper in the saxophone section. "Art soloed on all the things that I sang," Reed recalls. "We were friends."

Reed was released from prison for the final time in 1966, though it would be another 20 years before he finally quit using heroin. He now works as a health educator, trainer, and program planner at a major medical Bay Area HMO and other health agencies.

Ed Reed began singing in public again in the late 1980s at Bay Area venues with guitarist Alex Markels. He took singing performance classes at Berkeley's Jazzschool; later, he landed a weekly gig at the Cheese Board Pizza Collective, also in Berkeley. In summer 2005, at his wife Diane's suggestion, Reed attended Jazz Camp West, where he met Peck Allmond.

"Peck told me I needed to record," says Reed. "He brought in Bud Spangler, and together they helped Diane and me put the pieces together."

Among the bookings Ed is looking forward to this year: an appearance at the Sonoma Jazz Festival 5/27; Anna's Jazz Island in Berkeley, 6/16; and a benefit for the Monterey Jazz Festival and the National Steinbeck Center, 9/19.

"I was so scared," he says of his early attempts at being a jazz singer more than half a century ago, "but I ain't scared now."

Ed Reed Sings Love Stories
Available on CD Baby
(with sound samples, and a listener review by composer Richard Rodney Bennett, who calls Reed "one of the great undiscovered jazz singers. . . A lovely fresh, imaginative singer with great taste and jazz chops.")
www.edreedsings.com
Posted by Arnaldo DeSouteiro at 7:09 AM