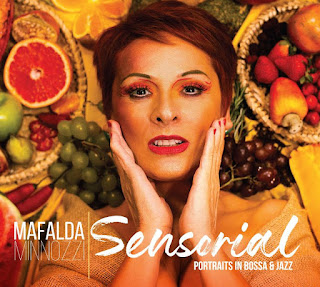 Next week, NY-based Italian vocalist Mafalda Minnozzi will release "Sensorial - Portraits in Bossa & Jazz." Under the musical direction of guitarist Paul Ricci and with the help of heavyweights like pianist Art Hirahara, bassists Essiet Okon Essiet and Harvie S, drummer Victor Jones and percussionists Will Calhoun and Rogério Boccato, "Sensorial" revisits the Brazilian songbook through compositions made famous by the likes of João Gilberto and Antonio Carlos Jobim, while consciously interlacing the dynamism of NYC in an imaginative blend of Bossa and Jazz.

It’s no surprise that musical director Paul Ricci has lent his talents to the works of singers Astrud and Bebel Gilberto – wife and daughter of João.

Positive feedback on the project is already coming from Latin Jazz Net (Editors Pick!), Musical Memoirs, and the Jazz Owl, among others. Jazziz magazine premiered the first single.

Minnozzi's trajectory from clubs and TV in Rome to Rio De Janeiro launched an over 20 year career in Brazil that includes collaborations with Milton Nascimento, Leny Andrade, André Mehmari, Guinga, Hugo Fattoruso, Filó Machado, Martinho da Vila, Toquinho and so many others. Her resume includes TV shows, 15 CDs, 2 DVDs, film and TV soundtracks as both singer and composer, S. American jazz festivals and shows throughout Brazil in its most prestigious venues.

At the same time, she has performed in major Italian jazz festivals often with her “eMPathia Jazz Duo” project with Paul Ricci, and has recently brought her NY band on an Italian jazz festival tour previewing the release of "Sensorial," garnering her acclaim in JAZZIT magazine’s top 10 vocalists two years in a row in 2018 and 2019.

In NY, she has been making her name at Birdland, Mezzrow’s and Zinc bar among other venues over these last 3 years. A growing fan base and buzz from NY’s great players have made each of her appearances an event as the scene integrates with and embraces Mafalda Minnozzi’s style.
Posted by Arnaldo DeSouteiro at 10:17 PM