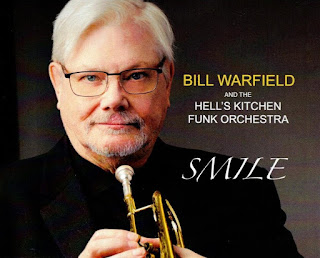 Smile's title refers naturally to the iconic Charlie Chaplin standard, which bookends the album in two versions (vocal and instrumental). Yet it also serves as a succinct description of the overall recording: an array of one joyful, kinetic performance after another, which gave the musicians of the HKFO as much delight to play as it does for the listener to hear. "We had so much fun making this album, and I think it sounds it," says Warfield, who arranged all 12 tracks. "For me, that's what it's all about."

Half of the fun is in guessing how the band might repackage the rhythms on Smile -- especially its less obviously groove-ready tunes. Indeed, surprises abound in their treatments of country classic "Ode to Billie Joe," featuring a soul-drenched Stuart vocal; beloved Muppet anthem "The Rainbow Connection," here a powerful jazz waltz with guest singer Carolyn Leonhart taking a tender turn; and the album highlight, Mike Post's "Theme from Law & Order," which becomes an amazing mash-up with John Coltrane's "A Love Supreme."

Neither, though, do Warfield and company take the predictable routes on the Weather Report staple "Cucumber Slumber," Booker T. & the MGs' Southern soul linchpin "Hip-Hug-Her," or the Gladys Knight smash "I've Got to Use My Imagination." In each case, Warfield's arrangements find resourceful new ways to turn up the heat. "I approach these songs from a different standpoint," he explains. "with a deep understanding of what goes into making commercial music, but with a jazz sensibility." His charts are ably augmented with hard-charging, rewarding solos by the likes of guitarist Matt Chertoff, alto saxophonist Andrew Gould, and bari man Matt Hong as well as Shaffer, Marini, Eckert, and Warfield himself. 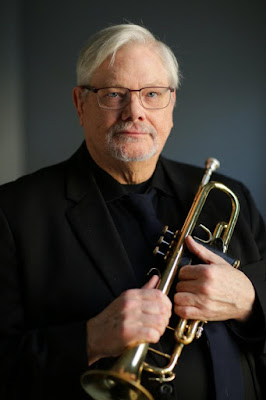 Bill Warfield was born March 2, 1952 in Owings Mill, Maryland, just outside Baltimore. While his was a musical family (his father played guitar and sang, and both parents played piano), it had no hi-fi record player until Bill himself brought one home in eighth grade. He quickly became enamored with the trumpet sounds he was hearing on contemporary records and radio, taking up the instrument himself. He was soon good enough to join the Maryland Youth Symphony Orchestra and to study at the Peabody Conservatory Preparatory School.

A serious car crash when he was 18 -- one of two such accidents that would nearly end his musical career before it began -- scuttled his plans to join the U.S. Air Force jazz ensemble. Warfield instead attended Maryland's Towson State College (now Towson University), studying with Ray Moore and Hank Levy before leaving school to become a full-time musician in the Baltimore area, including directorship of the City of Baltimore's Port City Jazz Ensemble.

Moving to New York in 1980, Warfield quickly busied himself on the music scene: He toured with Paul Anka, joined the Bill Kirchner Nonet and the Musicians of Brooklyn Initiative (MOBI), subbed in the Mel Lewis Jazz Orchestra, and formed his own band. In the meantime, he completed his academic studies at Manhattan School of Music (where he went on to earn a Master's in music), then took a job on Wall Street before returning in 1990 with his debut big band album, New York City Jazz. 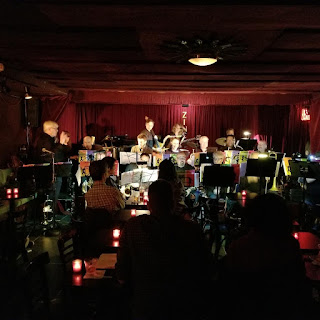 From there, Warfield's career kicked into high gear. A string of successful big band engagements and albums followed, as did stints with Ornette Coleman, Mari Okubo, and Dave Stryker. He also became director of the New York Jazz Repertory Orchestra. The Hell's Kitchen Funk Orchestra premiered in 2015 with Mercy, Mercy, Mercy; Smile is the little big band's follow-up.

"I look at the world around me and I'm often baffled, shocked, even frightened by what I see," says Warfield. "No matter what I face, I still search for the spiritual strength, the peace to reflect. I am certainly no stranger to adversity, and realize that no matter how difficult a situation I find myself in, that this too shall pass. Confident in this knowledge, while I'm waiting, it just seems easier to smile."