Vocal CD of the Month - "Laurie Antonioli: The Constant Passage of Time" 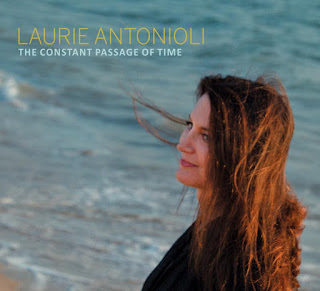 The title -- which is also a lyric from the album opener "Longing for You" -- was inspired by Antonioli's reflections on an eventful 2018. The year included several benchmarks for the Bay Area singer, among them her sixtieth birthday, the twentieth anniversary of her sobriety, and the birth of her second grandchild. In addition, she recorded two albums worth of material at Berkeley's legendary Fantasy Studios (before its closure in September).

"Recordings mark time and document the moment," says Antonioli. "Recordings are 'fixed' in that they stay put. In life, change is a constant, and our internal landscape is always evolving, which is reflected in the music."

Laurie Antonioli and LaylaThe music also reflects Antonioli's broad palette, her warm, supple mezzo-soprano equally compatible with the moody musings of "Longing for You" (set to Ferrante's music) and "Moonbirds" (a collaboration with Enders); the driving rock beats of "Highway" (also with Enders), Sheryl Crow's "Riverwide," and Neil Young's "Don't Let It Bring You Down"; and the delicate balladry of "Layla" and "And So It Is,"Antonioli's lyrical treatments of compositions by Lê ("Bee") and Nagel ("As Is"), respectively. (At left: Antonioli with granddaughter Layla.)

The Constant Passage of Time also continues to showcase Antonioli's special relationship to the music of Joni Mitchell, as previously documented on her 2014 tribute Songs of Shadow, Songs of Light. "It goes without saying that Joni is simply one of the greatest composers and lyricists of modern music," says Antonioli, who on this outing celebrates Mitchell first with a surprising medley of "Harry's House" and "The Arrangement," then by unearthing the obscure but haunting "Love."

The musicians who accompany Antonioli play no small part in shaping the album. "This project, like my others, is crafted around the players in the band," she says, noting that MacNab has a particularly prominent role on Constant Passage. "He can play anything, and I'm happy to feature him more on this record." 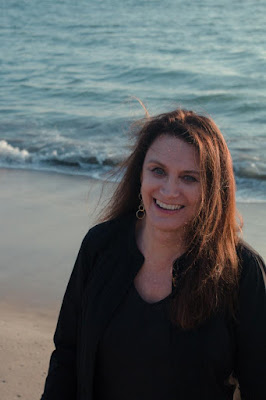 Laurie Antonioli was born March 9, 1958 in Marin County, California. She started playing guitar and writing songs as a teenager in the early 1970s, inspired by Neil Young, James Taylor, Jimi Hendrix, and particularly Joni Mitchell. She caught the jazz bug while listening to her grandmother's records, which led to studies in the pioneering jazz vocal program at Mt. Hood Community College in Portland, Oregon.

Returning to the Bay Area after graduation, Antonioli began sitting in with singer Mark Murphy -- which in turn brought her to the attention of saxophonist Pony Poindexter, who in 1980 hired the 22-year-old vocalist for an extended European tour.

In 1985, Antonioli recorded her debut album Soul Eyes, a duo session with piano great George Cables. Throughout the decade she was one of the region's most visible singers, performing regularly with jazz luminaries such as Joe Henderson (a longtime collaborator).

Derailed throughout the '90s, Antonioli began rebuilding her career in 2002, when Austria's KUG University hired her as a professor for the vocal jazz department. In 2004 she recorded her second album, Foreign Affair, with a cadre of players from Serbia, Albania, Germany, and the U.S. She remained in Europe until 2006, when she returned to run the Vocal Jazz Studies program at Berkeley's California Jazz Conservatory.

She gained widespread attention with the release of 2010's American Dreams, on which she introduced the titular band (with John Shifflett, who died in 2017, holding the bass chair). They also accompanied her on 2014's Songs of Shadow, Songs of Light, returning once again -- with Feiszli now on bass -- for The Constant Passage of Time.

Laurie Antonioli performed a CD release concert at the California Jazz Conservatory (2040 Addison Street), Berkeley, on March 30. Bassist Nenad Vasilic, who mixed the new CD and who co-produced and played on Foreign Affair, was featured as a special guest on a couple of songs with Antonioli.