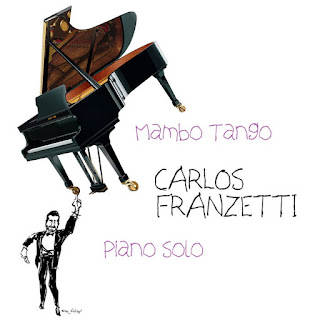 Solo piano albums allow talented pianists the opportunity to express themselves as freely as they want. Without concern for other band members, the pianist can follow whatever whim that presents itself.

When a composer/pianist/arranger of Carlos Franzetti’s caliber makes a solo piano record, it can be so much more. "Mambo Tango" provides an opportunity for this Grammy Award winning composer to not only showcase his talent as a keyboard player but also gives an exposed look at his compositional and arranging style on some classic fare, along with three Franzetti originals.

The NY-based Argentinean composer has shown his diverse range as composer over the years with pieces that span the genres of jazz, classical, tango and other Latin music. On the introspective "Mambo Tango," Franzetti takes on compositions from composers he finds inspirational including Rodgers and Hart ("Have You Met Miss Jones?"), Gary McFarland ("Gary's Waltz"), Bill Evans ("Waltz For Debby"), and jazz’s most important composer Duke Ellington ("I Got I Bad And That Ain't Good").

However, my personal favorite tracks are Franzetti's brilliant renditions of lesser known tunes such as "Look At That Face" (a gorgeous ballad by Leslie Bricusse & Anthony Newley), "Jazz Autographs" (written by multi-Oscar winning composer John Williams on his early days as a jazz artist) and specially Clare Fischer's lovely soft samba "Carnival," aka "João," since it was inspired by Bossa Nova genius João Gilberto and originally recorded as an instrumental tune on Bud Shank/Clare Fischer's "Bossa Nova Jazz Samba" (Pacific Jazz, 1962) and with lyrics by Fischer himself on "The Hi-Lo's Happen To Bossa Nova" (Reprise, 1961), a groundbreaking album he arranged for the historic vocal group.

Carlos Franzetti's originals are equally fascinating: "Fantasia," "Milonga del Adios" and the title track "Mambo Tango" with which I fell in love at first listening when hearing the wild fusion version that he recorded in 1979 on Ray Barretto's best album ever, "La Cuña" (CTI), featuring Tito Puente.

Franzetti’s talents as a musical craftsman and improviser truly shine on this solo recording, a timeless masterpiece. 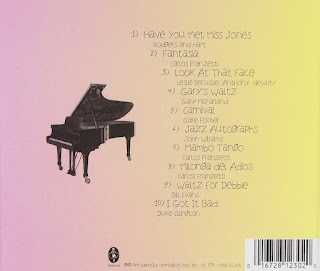 Posted by Arnaldo DeSouteiro at 11:20 PM