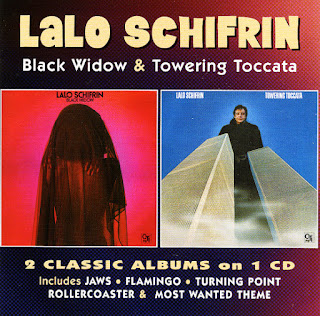 These albums feature some of the greatest jazz musicians of the period including Eric Gale, John Tropea, Steve Gadd, Hubert Laws, Don Alias, Sue Evans, Anthony Jackson & Joe Farrell to name but a few. Lalo Schifrin puts a jazz-funk vibe to some classic movie themes including Steven Spielberg's blockbuster "Jaws" which was released as a single and charted at 14 in the UK Singles chart, and became a worldwide Disco smash. Schifrin's CTI debut "Black Widow" proved a hit as it landed at no. 22 in the US list of Jazz bestsellers, and it also appeared on the R&B chart. There are stunning arrangements of "old" material: Ary Barroso's "Bahia" (Na Baixa do Sapateiro), Les Baxter's "Quiet Village", the lovely "Flamingo," and the standard "Moonglow" (Theme from "Picnic.") It's a joy to listen guitarists Eric Gale and John Tropea playing together in all tracks! 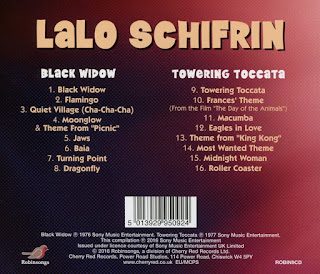 It's on sale at Dusty Groove and that's what they say:

A pair of CTI 70s classics from Lalo Schifrin – back to back on a single CD! First up is Black Widow – funky 70s work from Lalo – with a bit of a disco twist, and plenty of the electric jazz funk elements that were showing up in his soundtracks at the time! Lalo's on keyboards, playing a cool host of electric ones that give the record a nice spacey sound over the top of the funky arrangements.

There's plenty of nice guitar work – either by Eric Gale or John Tropea – which gives the cuts some nice choppy funky bits that drive them a bit harder than you might expect. Includes an amazing funk remake of "Quiet Village", plus "Dragonfly", "Black Widow", "Baia", "Turning Point", and a version of the "Jaws" theme!

Towering Toccatta is electric 70s work from Lalo Schifrin – with a tight uptempo funky sound that's similar to his strong "cop show" soundtrack themes of the time! This album's a pretty great testament to Lalo's durability as one of the great composer arrangers – sublime stuff from the late 70s, and a record that really works nicely alongside Schifrin's music for films.

Lalo's got a great crew for the set, too – including Joe Farrell and Jeremy Steig on flute, Eric Gale on guitar, Anthony Jackson on bass, Steve Gadd and Andrew Smith on drums, accompaniment on keys by Chuck Spangler and a host of others! Titles include "Eagles In Love", "Macumba", "Theme From Most Wanted", "Theme From King Kong", and "Roller Coaster".
Posted by Arnaldo DeSouteiro at 6:47 PM