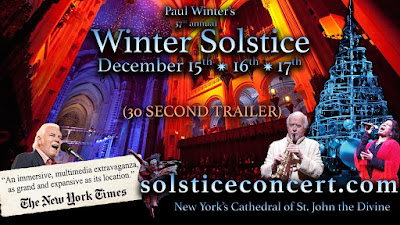 Paul Winter’s Winter Solstice celebrates the spirit of the holidays within the extraordinary acoustics of New York’s greatest Cathedral. A dazzling extravaganza of music and dance, these performances offer a contemporary take on ancient solstice rituals, when people gathered together on the longest night of the year to welcome the return of the sun and the birth of the new year. The event has become New York’s favorite holiday alternative to the Nutcracker and Radio City’s Christmas Spectacular.

The seven-time Grammy-winning Paul Winter Consort will present their 37th Annual Winter Solstice Celebration at New York’s Cathedral of St. John the Divine, in four concert performances December 15, 16, & 17, 2016. The ten-member Consort will be joined once again by the 25 dancers and drummers of the Forces of Nature Dance Theatre, with special guest Gary Brooker, founder, composer, and vocalist of the iconic band Procol Harum.

This year’s Solstice Celebration will be a tribute to the late George Martin, renowned producer of the Beatles’ recordings, who also produced the Paul Winter Consort’s landmark album Icarus. Winter recalls that working with Martin was a great learning experience for the Consort, and the Icarus album provided the group with the accolade of a lifetime. In his 1979 autobiography, All You Need is Ears, Martin refers to Icarus as “the finest record I have ever made.”

Gary Brooker, founder, vocalist, composer, and pianist of the iconic band Procol Harum, will be a featured special guest in these concerts. Paul Winter has loved Gary’s bluesy voice (most famous for “A Whiter Shade of Pale”), since Procol Harum and the Consort played together at the Fillmore East in 1971. The two bands felt a musical kinship from their common grounding in classical music, and commitment to dynamic rhythm in their respective genres. This December, in honor of their mutual friendship with the late Sir George, Paul and Gary will be presenting a program that includes classics from Procol Harum and from the ICARUS album, along with new music created for the Solstice Celebration.

Manhattan’s Cathedral of St. John the Divine is more than a site of liturgy or dogma. It’s a home for the human spirit, meant to uplift, inspire awe, unite, and give refuge. It’s the perfect location for Paul Winter Consort’s ongoing exploration of the turning of the seasons and the tuning of the soul. The Winter Solstice Celebration is designed to give deeper festive meaning to the year’s end.

“Of course, this is a concert, a performance, but it’s also a way to make the transition from the old year to the new, to find a new evocation of the ancient rite of passage of our ancestors in the Northern Hemisphere,” says Winter. “The longest night of the year marks the moment despair can turn to joy. It’s a message we can all hear, that most likely we all need.”

General Admission tickets are available for $35 and $55. Reserved Seating is available for $90. To purchase tickets please visit stjohndivine.org or call (866) 811-4111. Tickets on sale after Labor Day.

The largest cathedral in the world, utterly unique as a venue, St. John the Divine's all-embracing vastness overwhelms differences, and yet welcomes and affirms diversity. Since 1980, when it began, the Winter Solstice Celebration has brought together musicians from around the world, everything from raucous Russian choruses and party-ready samba bands to powerfully contemplative performers, from Puerto Rican pop singers and prisoners of conscience to prayerful Tibetan vocalists. Over the years, the event has evolved into a theatrical celebration that inhabits the entirety of the Cathedral’s cavernous space, all the way up to the 150-foot ceiling. The titanic space transforms into a forest, or a night sky, where a giant earth globe spins from the vault like a tiny planet in the cosmic vastness. What other concert space could host the world’s largest sun gong as it rises, spotlit, 12 stories high? “Of all the places I've played in America, only two could host a concert on this scale: the Cathedral and the Grand Canyon,” Winter says. (The Cathedral happens to have the same seven-second reverberation as the Grand Canyon.) 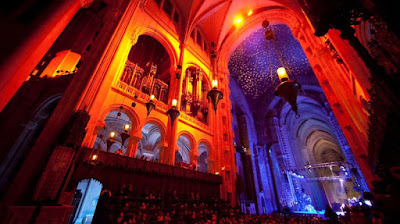 WINTER SOLSTICE TRADITION
Winter Solstice is the shortest day and the longest night of the year. Traditionally, it is a time of both foreboding and expectancy, as the longest night leads to the revival of the sun. And yet it is a turning point, when the sun reaches its southernmost point from the equator and seems to pause before reversing course. “Solstice” in Latin means “the sun standing still.”

In ancient times, observers watched the sun sink lower in the sky each day, and feared it would disappear completely and leave them in darkness.

People practiced special rituals intended to entice the sun’s return. Bonfires and candles, with their imitative magic, helped fortify the waning sun and ward off the spirits of darkness. These symbols live on in our modern seasonal customs: the candles of Hanukkah and Christmas are kin to the fiery rites of old, which celebrated the miracle of the earth’s renewal.

These traditions reflect our need to come together in times of extended darkness. We celebrate not only the rebirth of the sun, but the community of life on earth.
Posted by Arnaldo DeSouteiro at 9:09 AM