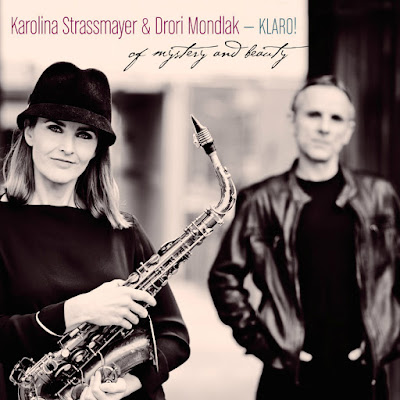 With their newest recording, "Of Mystery And Beauty," alto saxophonist Karolina Strassmayer and drummer Drori Mondlak continue their creative collaboration that began in New York City in 2000. Now they have a home base in Cologne, Germany, since Strassmayer became the first woman to join the WDR Big Band in 2004 and Mondlak moved some years later to join her.

In their seventh recording together ("Wake-up Call" and "Small Moments" are among their previous stunning albums), their vision has crystallized into an original and deeply personal sound. Strassmayer and Mondlak consider this collection of original compositions and solo improvisations to be their most powerful recording to date. Their quartet, KLARO!, fuses the romanticism of European classical and folk music with the rhythmic fire and swing of American jazz and the harmonic sophistication of contemporary improvised music. Two other outstanding musicians -- pianist Rainer Böhm and bassist John Goldsby -- complete the group.

I don't like comparisons because music is not competition. But sometimes it's important to use some references. Listening to this album, just the opening track, "From Her Pale Blue Home," of an abrasive beauty, would be enough to classify it as a contemporary masterpiece. And to point out that Strassmayer's expressiveness on alto sax is on the same level (and impress me) of the late Phil Woods, my all time favorite alto sax player, making her a supreme balladeer. Precious tune, perfect articulation, wonderful phrasing. And that sound that speaks direct to the heart. Each note with its own intensity.

Her partner in music & life, Drori Mondlak -- born of a Polish father and English mother in Mexico City but raised in NYC -- is a drummer of extreme subtlety and melodic refinement that reminds me of Roy Haynes on his best moments. What he does with the sticks and mallets on cymbals throughout the third track, "Postcards From A Quiet Place," is a lesson in space and use of silence. And Strassmayer once again plays with incandescent power.

These two above mentioned tunes (plus "Of Space And Rest" and "Gently Spoke The Mermaid") are my personal favorite tracks, because of my passion for ballads. But the up-tempo numbers like "Fanfare From Another World," that could be qualified as contemporary bop, are also very impressive. Not to mention the funkyfied "Side To Side" and Mondlak's solo piece, "Cascades." On the closing theme, "Still In Her Ears", Strassmayer is heard on flute, in a duet with German pianist Rainer that evokes me memories of a lost gem recorded by Dave Liebman & Richie Beirach in 1975, "Forgotten Fantasies."

Böhm, whom I heard for the first time on albums by bassist Dieter Ilg, also shines for keeping the high level of eloquent introspection, soloing with the typical aplomb of European jazz players. John Goldsby, who has recorded with Lalo Schifrin, John Barry and one of the best pianists in the world, the extremely underrated Frank Chastenier, moved to Germany when joined the WDR Big Band back in 1994. His self-restraint soloing on "Gently Spoke The Mermaid" confirms his affinity with the "play only the essential" style of Klaro!

“Beauty means different things to different people. But there is a universal truth about it, regardless of taste and aesthetic; beauty has the power to move the heart,” says Karolina Strassmayer.
Posted by Arnaldo DeSouteiro at 8:19 PM